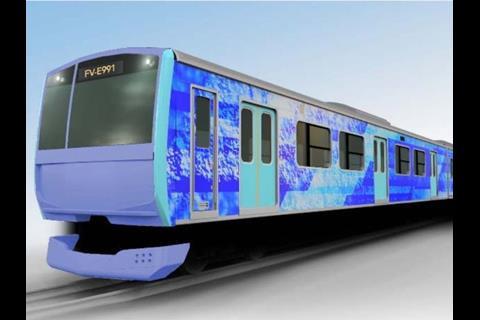 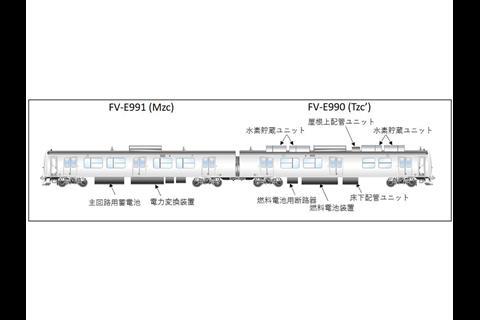 The railway set an objective to ‘diversify energy’ as part of its ‘Move Up 2027’ 10-year vision adopted last year, and it hopes its efforts to use hydrogen fuel will accelerate its move towards a low carbon society.

The company announced on June 4 that it is investing ¥4bn on the development of a two-car trainset, which will be equipped with fuel cells and lithium-ion batteries as well as high-pressure hydrogen tanks. The Series FV-E991 unit will be formed of one motor car and a driving trailer.

Two 180 kW polymer fuel cell stacks able to operate at temperatures down to -10°C will feed two 25 kWh li-ion batteries, powering a VVVF converter with twin inverters to feed the four 95 kW traction motors. Hydrogen will be stored in four banks of carbon fibre composite tanks, each comprising five 51 litre modules. At a maximum pressure of 70 MPa this will give a range of 140 km, compared to 80 km at 35 MPa. Maximum speed of the 1 067 mm gauge trainset will be 100 km/h.

JR East hopes to begin test running in the 2021 financial year, and to have the technology ready for commercial applications by 2024. A series of demonstration tests ‘in a normal operating environment’ would confirm the safety, performance and environmental impact of the fuel cell trainset, and inform the ‘future practical use of fuel cell vehicles’, including optimisation of the control technology and development of support infrastructure.

Trials are to be undertaken on various routes in Kanagawa prefecture, primarily the outer end of the Nambu Line between Kawasaki and Musashi Nakahara, and the 4·1 km branch from Shitte to Hama-Kawasaki. The train will also be tested on the Tsurumi Line near Yokohama.

In January 2015 JR East concluded a ‘smart co-operation agreement’ with the prefecture and the cities of Kawasaki and Yokohama aimed at the development of low-carbon initiatives. On June 3 the operator signed a further agreement with JR Freight and Showa Denko Co to provide infrastructure facilities for the test programme.