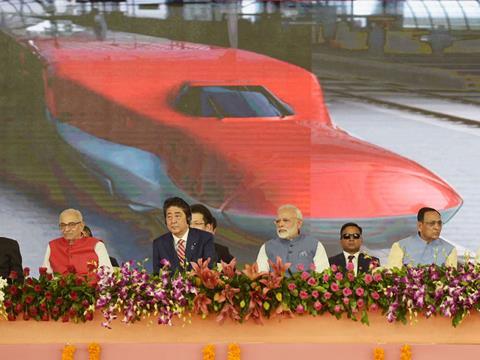 INDIA: Tenders for design, construction and commissioning of civil engineering works on around half of the planned Mumbai – Ahmedabad high speed line were invited by the National High Speed Rail Corp Ltd on March 15.

Covering a 237 km section in the state of Gujurat, running south from Vadodara to the border with Maharashtra near Zaroli, package C4 accounts for 47% of the 508 km route. Apart from one short tunnel of around 280 m, much of the line will be elevated, passing over 24 rivers and 30 major roads. The package also includes construction of four of the 12 planned stations, at Bharuch, Surat, Bilimora and Vapi.

Contractors have been invited to attend a pre-bid briefing session on April 16. Bids are to be submitted by July 15, with NHSRCL expecting to announce the winning bidder by November. According to NHSRCL, land acquisition is well underway, with around 30% of the total already acquired. Preparatory works are in progress at various locations, including land clearance and utilities relocation. In total, 350 km of the route lies in Gujurat, with 155 km in Maharashtra and 2 km in the Union Territory of Dadra and Nagar Haveli.

Designed for operation at up to 350 km/h, the 1 435 mm gauge line is being developed using Japanese Shinkansen technology, and Japan is expected to contribute up to 81% of the estimated Rs1 080bn cost. The formal groundbreaking ceremony at Ahmedabad in September 2017 was attended by Japanese Prime Minister Shinzo Abe as well as India’s Narendra Modi.