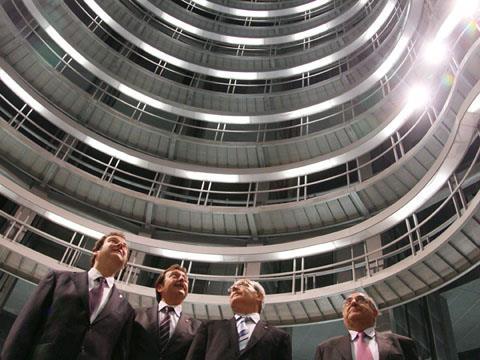 SPAIN: On April 18 the President of the Generalitat de Catalunya José Montilla inaugurated a 3·4 km section of the new automated metro Line 10 between Gorg and Bon Pastor, with intermediate stations at La Salut and Llefià. Services on the initial 4 km section of Line 9 from Can Zam to Cam Peaixauet, which opened last December, were extended to Bon Pastor at the same time.

Also present at the ceremony were the Minister of Land Planning & Public Works, Joaquím Nadal, the Mayor of Badalona, Jordi Serra, and the Mayor of Barcelona Jordi Hereu. The line entered service at 15.00 the same day, and operator TMB distributed special tickets for two free trips to mark the occasion.

Both driverless metro routes now start from Bon Pastor, with Line 9 trains running to Can Zam and Line 10 to Gorg, in Badalona. Line 9 provides connections to Line 1 at Fondo, whilst Line 10 connects with Line 2 and the Trambèsos tram at Gorg.

Lines 9 and 10 will operate between 06.00 and 22.00 to allow testing to continue on the next phase, which will extend the shared route westwards to Onze de Setembre and La Sagrera; this is due to open in the summer. The 52-station 47·8 km project will be fully operational in 2014.

Initial estimates put ridership on the new branch at around 8 000 passengers a day, but this is expected to increase to 14 600 when the line reaches Sagrera, a key interchange providing transfers to suburban services as well as metro lines 1 and 5. Around 10 000 passengers are already using the Line 9 branch to Can Zam in Santa Coloma de Gramenet.