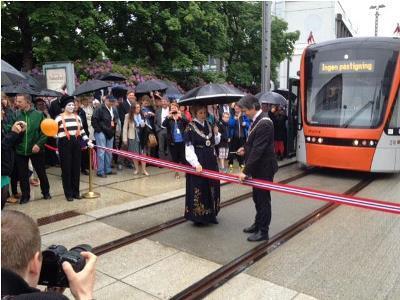 NORWAY: The second phase of the Bybanen tram line in Bergen opened on June 21, exactly three years after the first phase. City Mayor Trude Drevland and County Mayor Tom-Christer Nilsen cut the ribbon on the 3·6 km extension from Nettsun to Lagunen.

The project was carried out by Bergen commune, Hordaland county and the Norwegian Public Roads Administration. Atkins designed the track, catenary and rail power supply and RAMS-work.

Construction of a 7 km extension from Lagunen to Flesland is due to start in August for opening in 2016, and will include construction of a depot. In addition, three routes are being considered for a line linking the city centre with Åsane, and a decision should be made later this year.