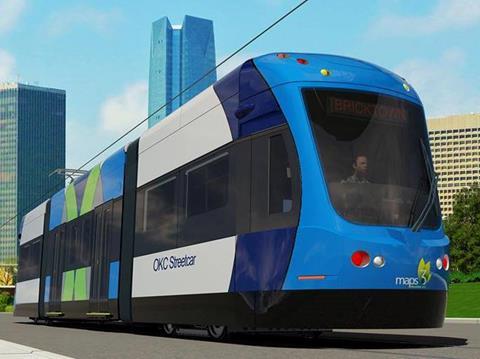 USA: The Oklahoma City council approved a $24·9m contract on March 22 under which Brookville Equipment Corp is to supply five low-floor streetcars.

The city council had previously approved a $22m contract with Inekon last September, but this was not finalised, as the supplier could not provide the required financial guarantees. Brookville had been second in the tender assessment.

Brookville expects to deliver the fleet between its orders for Detroit and Milwaukee, with the first vehicle due to arrive by October 2017. Deliveries of all five trams are to be completed by May 2018.

The vehicles will run in mixed traffic, and will be equipped with batteries for off-wire operation. This will be required on sections of the route that pass under BNSF bridges with overhead clearances of around 4 m. The batteries will have a two-year warranty, compared with a 10-year warranty on the frames and four years for the traction motors.

The city plans to exercise an option for a sixth vehicle within the next three months, which would bring the total order value to $28·9m including spare parts. The extra vehicle is needed because of a revision to the original route that would add 3·6 route-km.

The original route, a 7·5 track-km loop linking Midtown and Bricktown, is to be named the Blue Line. An additional Red Line will be built to serve the planned convention centre, which is to be developed in a different location than originally envisaged. Construction of the streetcar route is to begin this year, with passenger services expected to commence in mid-2018.