Build a tramway in 30 months 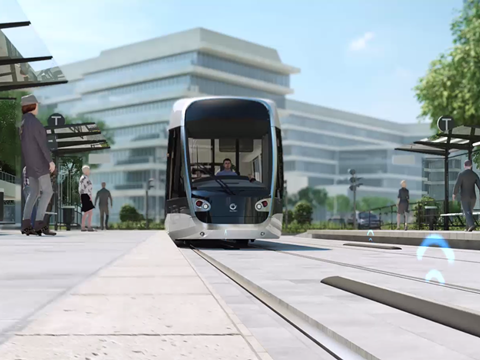 ALSTOM: The construction time for a new light rail or tram line could be reduced to just 30 months according to Alstom Transport, which launched its Attractis package at the UITP World Congress and Expo in Milano on June 8.

Bringing together experience gained in the construction of 16 light rail projects around the world under turnkey contracts, Attractis is also expected to reduce costs by up to 20%. This would make light rail more affordable for cities that might otherwise only be able to invest in bus rapid transit, according to Alstom Transport President Henri Poupart-Lafarge.

As with the Axonis low-cost metro package launched at the previous UITP congress, Attractis brings together existing products including the Citadis tram family, Appitrack slab track technology plus overhead or ground level power supplies. The vehicles could come from either the established X02 series or the newer X05 range.

Time and cost savings can be delivered in a turnkey package through having an integrated project team and optimising the various elements of the technology, believes Alstom's Vice-President for Rail Systems Eric Marie. However, this would require close attention during the initial planning phase to finalise the alignment and address utility diversions, so as not to halt the construction once work has begun. Although some aspects of the package are still being finalised, Marie anticipates that the company will be able to offer its first bids based on the Attractis concept before the end of this year.

The concept is designed to be scalable to suit flows of 6 000 to 14 000 passengers/h per direction, with the heaviest loads requiring coupled pairs of 30 m cars running at 3 min headways. Alstom points out that more capacity can be provided on a light rail line within the same track width and crew size by using longer cars, whereas increasing capacity on a bus route would require additional vehicles, staff and road lanes.