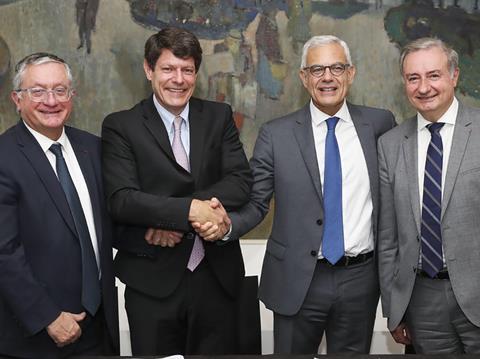 FRANCE: Alstom, IGE+XAO and Safran have agreed to establish a centre of excellence for onboard electrical systems in Toulouse.

Located at aerospace equipment manufacturer Safran Electrical & Power’s site, the facility will be able to accommodate up to 100 engineers. IGE+XAO is providing design, simulation and manufacturing software under a five-year agreement, while Safran will work with Alstom on electrical product design, including sharing best practice between aviation and rail.

‘With its new development methods, the centre of excellence will help to strengthen Alstom's skills and responsiveness in the field of onboard electrical systems, by benefiting in a collaborative environment both from the best practices of the aeronautical sector, which is leading the way in this field, and the proximity of IGE+XAO’s teams, experts in the railway electrical industry’, said Thierry Best, Alstom's Director of Operations. ‘This centre of excellence will thus contribute to developing projects such as the Athens tram, the new-generation RER or the future TGV’.