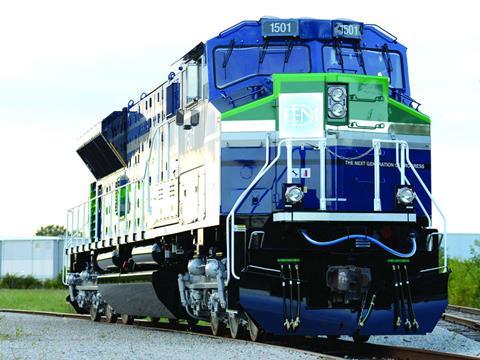 Announcing its Q2 2016 results on July 26, Progress Rail and EMD parent company Caterpillar said ‘weakness continued in the rail industry across all regions' and was the most significant reason for a decline in its Transportation sector sales in the Europe, Africa, Middle East and CIS region and in Latin America. Rail industry sales in North America ‘were about flat'. The company said its North American Tier 4 freight locomotive 'is on schedule for deliveries in the second half of 2016'.

Ukrainian Railways and GE signed a memorandum of understanding on July 21 for co-operation in the modernisation of UZ’s diesel locomotive fleet. GE is to provide a TE33A locomotive for testing during August, and could also provide technical training and kits for modernising existing locomotives.

The Rail Road Association of South Africa which has more than 100 corporate members has joined the Rail Working Group.

Wabtec Corp has announced Q2 2016 sales of $724m, down from $847m in the same period in 2015 with higher sales in the Transit Group being more than offset by lower sales in the Freight Group. 'Our Transit business is performing well, with revenue growth, improved profitability and a strong backlog', said President & CEO Raymond T Betler on July 25 'Our Freight business, however, continues to be affected by overall rail industry conditions and the sluggish global economy. In this environment we are focused on controlling what we can by aggressively reducing costs, generating cash and investing in our growth opportunities, including acquisitions.