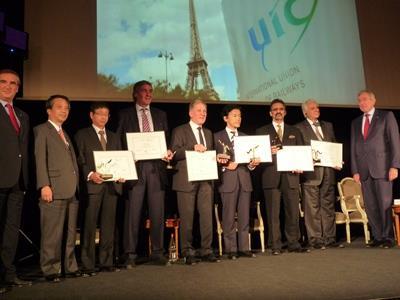 INTERNATIONAL: As part of the celebrations to mark the 90th anniversary of its formation, the International Union of Railways presented its first Innovation & Railway Research Awards at a ceremony in Paris on December 11.

During the event at the Automobile Club de France, following a high-level round table looking at the future role of railways in a changing world, the prizes were presented by UIC Director-General Jean-Pierre Loubinoux and the Chairman of the International Railway Research Board, Boris Lapidus, who is Director-General of the All-Russian Railway Research Institute (VNIIZhT).

Loubinoux said that UIC had been ‘surprised and delighted’ by the wide range of entries from both companies and individuals. Lapidus believed the association was ‘opening a new page in our history’. Awards were presented in six categories, selected from a shortlist of 20 finalists.

UIC Acting Chairman Satoshi Seino of East Japan Railway said it was ‘very meaningful’ for UIC to create an awards programme recognising technical excellence throughout the world, building on its historic role as the conduit for exchanging technical knowledge between railways. The next UIC awards will be presented in 2014.