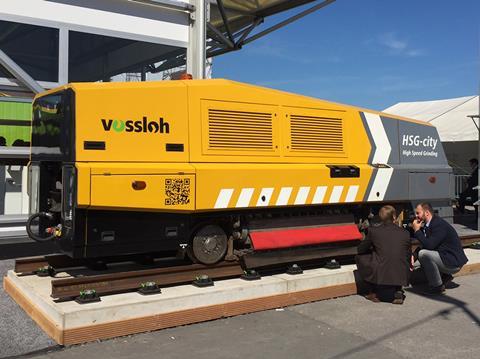 GERMANY: Vossloh announced on November 5 that it had agreed a deal to acquire Strabag Rail GmbH’s rail milling business, which comprises four milling machines and around 30 employees.

Vossloh said the purchase price and expected sales were in the ‘low double-digit million’ range. The transaction is expected to be completed by the end of the year, with the business being integrated into Vossloh’s Alpha Rail Team based in Berlin.

The acquisition is intended to support the development of Vossloh’s Lifecycle Solutions division as a comprehensive provider of maintenance services, with the company expecting rail milling to become more important as traffic and speeds increase. ‘When rails have been milled and are back in perfect condition, we build on this by offering the customer our worldwide unique preventive maintenance technology, so-called High Speed Grinding’, said Vossloh CEO Andreas Busemann.

A Strabag spokesperson said the company would continue to operate in the railway construction sector, where it had been active for more than 90 years, but had decided to sell the rail milling business because it was a specialised activity and required additional investment.