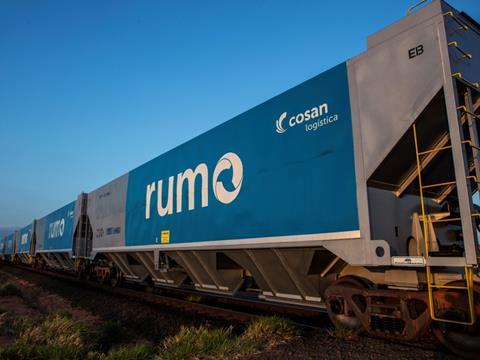 BRAZIL: Rumo has won the tender for a 30-year concession to complete and operate the 1 537 km southern section of the Ferrovia Norte-Sul corridor linking Porto Nacional in Tocantins to Estrela d'Oeste in São Paulo state.

When the offers were opened on March 28, Rumo’s bid of R$2·72bn was significantly ahead of the R$2·06bn offered by VLI, which was backed by Vale, Mitsui and Brookfield. Russian Railways had reportedly expressed interest in the concession but failed to submit a bid.

Describing the auction as a ‘milestone’, Infrastructure Minister Tarcísio Freitas said ‘the result was excellent and exceeded the government’s expectations’, with Rumo’s offer double the reserve price of R$1·35bn. He believed the ‘historic day’ would marked the ‘resumption of the rail sector in Brazil’. It is the first railway concession to be auctioned since VLI won the rights to operate the northern section of the Norte-Sul corridor between Porto Nacional and Açailândia in 2007.

Intended to open up the country’s agricultural heartland, the Norte-Sul railway has been under construction for many years, and is reported to be around 95% complete. The concessionaire has been given two years to make the railway operational.

Part of the Cosan group, Rumo already operates four railway concessions, following the merger of Rumo Logística and América Latina Logística in 2016. It runs a network of around 12 000 route-km, mainly in the states of São Paulo and Mato Grosso and the far south. Pointing out that the Norte-Sul concession offered synergies with its existing business, Rumo President Julio Fontana said it was ‘a good deal for our company’, adding that ‘we want to make the railway operational as fast as possible to generate cash’. Traffic on the route is predicted to grow steadily from 1·7 million tonnes in 2020 to 22·7 million by 2055.

Brazil’s new Bolsonaro government has already auctioned operating concessions for airports and port terminals, holding 23 competitions in its first 100 days in office. Freitas anticipates that two more railway concessions will be offered to the market in the coming months, noting that the Ferrogrão and FIOL railway expansion projects have already completed their public consultation phase.

A 65-year concession is envisaged to build and operate the 1 142 km Ferrogrão route (EF-170) running north from Sinop in Mato Grosso to the Amazon port of Miritituba in Para state. State-owned construction agency Valec has already started work on some sections of the 1 527 km West-East Integration Railway (FIOL, EF-334) linking Ilhéus and Figueirópolis, and the government envisages awarding a 33-year concession to complete and operate this line.