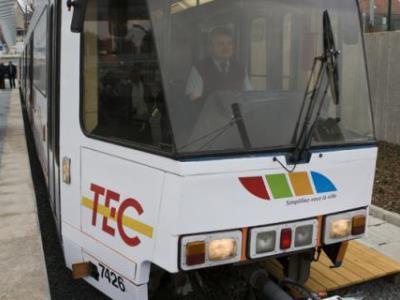 BELGIUM: Trams returned to Gosselies on June 21, with the inauguration of a 7·2 km extension of Charleroi light metro Line M3 to a new terminus at Faubourg de Bruxelles. Operator TEC Charleroi provided a free service across its entire network the following day to mark the start of regular services.

Following the route of a former SNCV tramway, the extension runs mainly in street along the Chaussée de Bruxelles through Jumet, Lodelinsart and Dampremy to join the Charleroi metro ring at Piges. The metre-gauge tram route had been closed in the early 1990s, but the tracks were retained so that TEC’s light rail cars could access the depot at Jumet. Reconstruction began in 2009 with a view to completion the line by 2011. Route M3 services began running in September 2012, but initially confined to the metro ring.

The Piges – Gosselies route still runs mainly in street, but has been completely reconstructed with 18 new stops. These include the Madeleine multi-modal interchange in Jumet, served by both tram and bus, as well as two park-and-ride facilities. Because of narrow clearances in Gosselies itself, the north and southbound tracks are laid in adjacent streets for around half of the route. In conjunction with the start of regular services, TEC and its parent Wallonia regional transport company SRWT launched a traffic safety awareness campaign.

The line is worked by TEC’s existing 44-strong fleet of articulated LRVs supplied by BN and ACEC in the 1980s. A 10 min interval service operates from Gosslies to the SNCB station at Charleroi Sud and back, providing interchange with lines M1, M2 and M4.