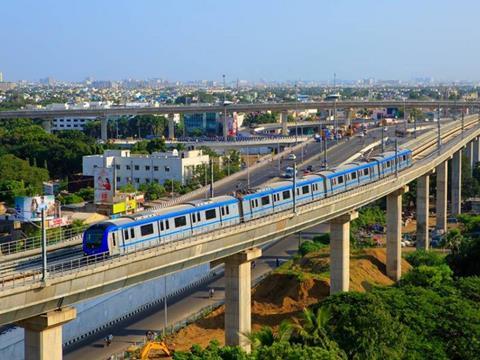 INDIA: The central government approved an extension of Chennai metro Line 1 on June 1. To be completed by March 2018, the project will be carried out by the existing Chennai Metro Rail Ltd special purpose vehicle of the central (50%) and Tamil Nadu (50%) governments.

The 9·1 km route would run north from Washermanpet to Wimconagar. The project cost is estimated at Rs37·7bn, with the central government providing Rs7·13bn, the state government Rs9·16bn and the remainder to come from borrowing.

Line 1, also known as the Blue Line, forms part of Phase I of the metro. The initial 23·1 km section is under construction between Washermanpet in the north and the airport in the south.

Passenger services on the Chennai metro started on June 29 2015 with the commissioning of a 10 km section of Line 2 between Alandur and Koyambedu. When completed, Line 2 would extend for 22 km from Chennai Central to St Thomas Mount.