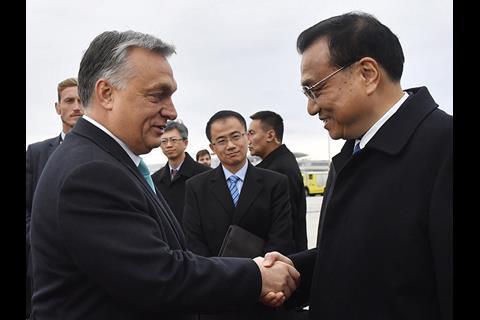 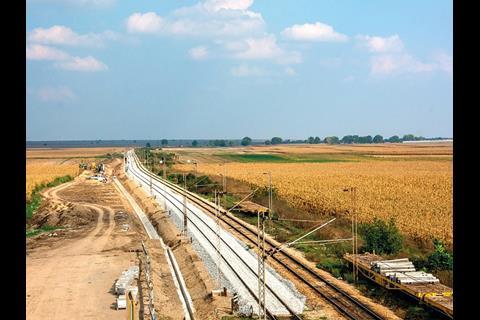 Last month, Hungary´s Foreign Minister Peter Szijjarto announced that his government was preparing to publish a procurement tender for the country’s share of the Chinese-backed Beograd – Budapest railway project, following the sixth heads of government meeting of the ‘16+1’ group in Budapest.

The 350 km line is seen as a centrepiece of the ‘Land Sea Express Route’, connecting the Chinese-run port of Piraeus with Western Europe. Four years ago, at the 16+1 summit in Bucuresti, China, Serbia and Hungary signed an MoU under which 85% of the funding for the US$3·8bn project would be covered by loans from China´s Eximbank.

The original plan had been to develop a high speed line as a demonstration of Chinese capability to implement high-tech rail projects in the European market. However, the scheme was soon ‘downgraded’ to a less expensive mixed-traffic route suitable for a maximum of 200 km/h, which would still cut journey times between the two capitals 8 h to 2 h 40 min. The double-track alignment would combine a mix of new construction and upgraded line, with 166 route-km in Hungary and 184 km in Serbia. China´s willingness to compromise on essential system characteristics has been interpreted as evidence of ‘goodwill’ and an incentive for Serbia to co-operate on future projects.

Yet, as reported last year, the project has caused some frustration for both its sponsors and the EU, as the affair has escalated from the domain of infrastructure planning into the realm of high politics.

Established in Warszawa in 2012, the 16+1 grouping is widely perceived as a diplomatic tool to serve China’s strategic interests by facilitating access to the European market for both exports and capital. It brings together 11 Central and Eastern European countries, five Balkan states and China. The secretariat is located in Beijing and managed by the Chinese Ministry of Foreign Affairs. Most of the member states that have joined the EU since 2004 are represented, while the Balkan states are all in the EU accession process.

The 16+1 is seen as a vehicle to promote the Belt & Road Initiative, and participating CEE countries have benefited from large infrastructure investments backed by Chinese interests. During the 2016 summit a dedicated China-CEE investment fund was established with an initial value of US$10bn. The Washington-based Center for Strategic & International Studies estimates that between 2012 and 2016, a total of US$15bn of infrastructure projects was promised to CEE countries.

According to a recent study by EBRD, the Bulgaria, the Czech Republic, Hungary, Poland, Romania and Slovakia have received 95% of the Chinese investment, while the non-EU countries (apart from Serbia) have seen much less. Observers in Brussels are becoming increasingly wary about the 16+1 alliance. Some fear that Chinese backing may place its beneficiaries into a stronger bargaining position in relation to the European Commission, whilst the potential conflict of loyalties might threaten EU-cohesion in sensitive areas such as trade, foreign policy and human rights. In 2016 it was suggested that Greece and Hungary, which have both benefited, had argued in favour of watering down an EU statement on China’s maritime claims in the South China Sea.

The situation has been described as a ‘stress test for EU cohesion’; in September German Foreign Minister Siegmar Gabriel expressed his concern that if the EU did not succeed in developing a single strategy towards China, then China would succeed in dividing Europe. China´s strategic engagement with the CEE countries has put a strain on their relationships with other member states and the EU institutions.

In February, the Commission initiated an investigation into whether the award in November 2015 of a US$1·6bn contract for the Hungarian section to a consortium of MÁV and China Railway International Group had violated EU tendering rules. Szijjarto´s announcement might be a first step to put the Hungarian part of the project back on track.

Meanwhile, on November 27 the Serbian government announced that work had started on its part of the line, following the receipt of a US$300m loan from Eximbank in May. Serbian infrastructure manager Infrastruktura železnice Srbije has signed an agreement for RZD International upgrade the 40·4 km Stara Pazova – Novi Sad section of the route using US$247·9m from a Russian loan agreed in 2013.

Read more about the Beograd - Budapest upgrading project in the January 2017 issue of Railway Gazette International, available to subscribers in our digital archive.