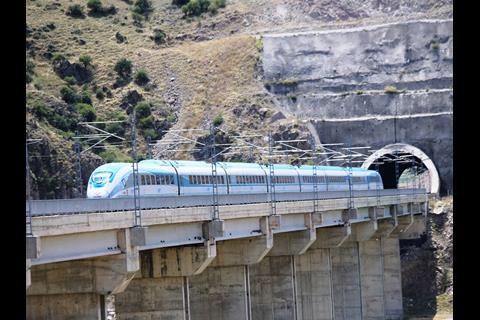 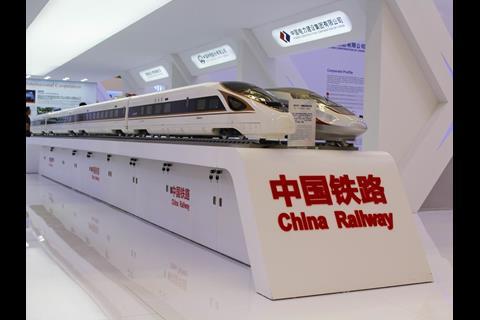 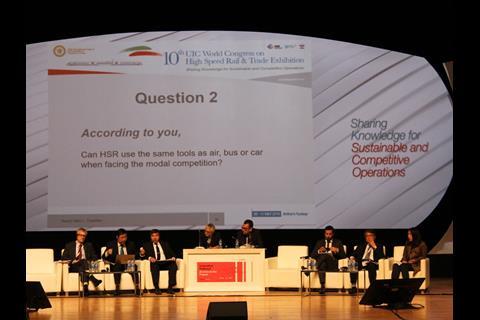 show caption
Global ridership has surged by 40% in the three years since UIC last staged its World Congress on High Speed Rail. Yet operators and policymakers must work hard to keep the rail mode ahead as competition grows both in and for the market. Benjámin Zelki reports from the latest summit held in Ankara on May 8-11.

INTERNATIONAL: The global reach of high speed rail continues to expand, while at the same time existing services are seeing a sustained rise in patronage. That was the upbeat message from the International Union of Railways’ 10th World Congress on High Speed Rail held in Ankara on May 10-14.

Yet alongside the optimism was a note of caution, with competition emerging as a key theme during the event. Most immediately, this means competition from other modes in a market where travellers are faced with multiple choices to complete their journeys. Rail must continue to enhance its level of customer service to provide more frequent connections on the busiest corridors, delegates were told.

Nevertheless, high speed rail remains aninternational growth story. Since the previous World Congress was held in Tokyo in 2015, UIC’s Passenger Department Director Marc Guigon reported that the global network of high speed lines, which it defines as new lines with an operating speed of 250 km/h or higher and upgraded legacy routes with operating speeds above 200 km/h, had increased by 20% while passenger-km were up by no less than 40%. There is now 42 000 km of high speed railway in use around the world, of which China accounts for 27 000 km, all of which has opened in the past 10 years.

UIC reiterated high speed rail’s ability to gain modal share from other forms of transport. Some examples are already familiar, such as the withdrawal of air services between Paris and Brussels, but encouraging evidence is also appearing elsewhere. In Turkey, TCDD Tasımacılık has gained a 72% share of the public transport market between Ankara and Eskişehir since high speed services began in 2009, despite intense competition from low-cost coaches. However, the competitive threat has continued to evolve, with bus brands like Flixbus offering enhanced onboard amenities such as free wi-fi. Train operators could not afford to lag behind in matching such offers, the Congress was told by several speakers.

Nevertheless, some operators were able to point to innovative responses to market need. Italy’s Italo-NTV sends push notifications to their customers’ smartphone if their planned train is delayed, while South Korean national operator Korail’s app automatically offers the passenger an option to take an earlier train than the one they have booked if they arrive early at the departure station.

Yet some speakers were keen to move away from a ‘surface airline’ operating model, predicting instead the rise of the high speed metro. This was the vision outlined by Prof Andrew McNaughton, now Strategic Technical Advisor to HS2 Ltd in the UK. He suggested that an intensive service between eight of Britain’s largest centres would be key to the success of the High Speed 2 network now under construction; HS2 has an anticipated annual ridership of 85 million passengers, he added.

In Italy, on-rail competition between Italo and Trenitalia meant that a high speed train runs every 5 min in the peaks between Roma, Firenze and Bologna. Spanish national operator RENFE also highlighted the success of its shorter distance high speed services on routes including Toledo – Madrid, which are primarily aimed at commuters rather than long-distance passengers, with fares adjusted accordingly.

Another touchstone theme of the congress was the need for door-to-door mobility. Enhancing the inter-city leg of a journey would not be enough to win over the private car user, delegates felt. High speed networks must be developed alongside and integrated with urban transport to sustain further growth. Indeed, autonomous vehicles were cited as a possible feeder mode for high speed trains rather than as a competitor for the trunk haul, given rail’s speed and capacity advantages.

Bus networks can also complement high speed rail, but different approaches are evident in different markets. Italo for example uses coaches to serve destinations away from its core network, while TCDD offers combined rail and urban bus travel in a single booking.

A noteworthy aspect of the 10th Congress was the decision by FS Chief Executive Renato Mazzoncini to share a platform with Italo-NTV, represented by Special Advisor Andrea Giuricin. In stark contrast to the Italian state railway group’s attitude when NTV launched its services in 2012, Mazzoncini told the Congress that competition between the two operators is ‘a positive thing. We are not afraid of it and it pushes us to perform better’. Giuricin told Railway Gazette that ‘while FS was not in favour of the Italo project at the start, the results of competition have prompted them to change their mind.’

Mazzoncini told delegates that while FS subsidiary Trenitalia currently has around 70% of the domestic high speed passenger market, it has more customers overall than it had before the onset of competition. FS is now actively looking to enter international high speed markets, either as an open access operator or under contract.

The only other example of on-rail competition in the high speed segment is found in South Korea, where incumbent Korail shares tracks on the north-south routes to Mokpo and Busan with Supreme Railways. However, Korail has a 41% stake in SR, and the open access operator is the sole user of the branch serving Suseo station in the suburbs of Seoul, which is the site of a major urban development programme.

According to UIC’s Senior Advisor Juhyung Lee, a proposed merger of SR into Korail has been put on hold following a change of government earlier this month. The incoming Liberal party is thought to be more in favour of competition than the previous administration, and advocates point to changes at Korail since the launch of SR services — including discounts on fares of up to 30% for online purchases.

Authored by Andrea Giuricin, a detailed article on the progress of Italo-NTV since the company was established in 2006 appears in the May 2018 issue of Railway Gazette International, available to subscribers via our digital archive.