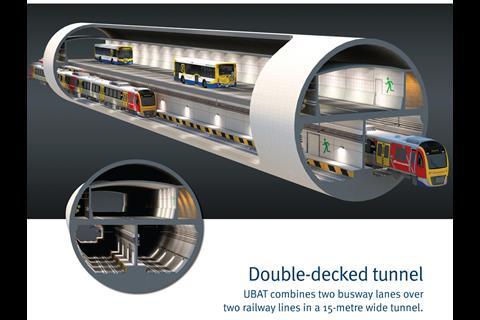 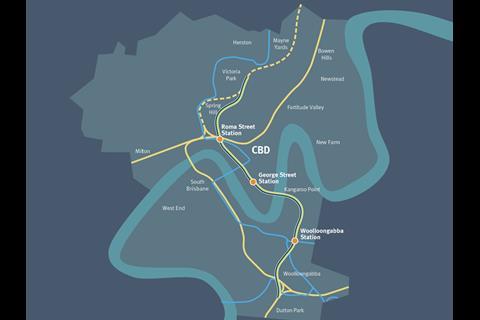 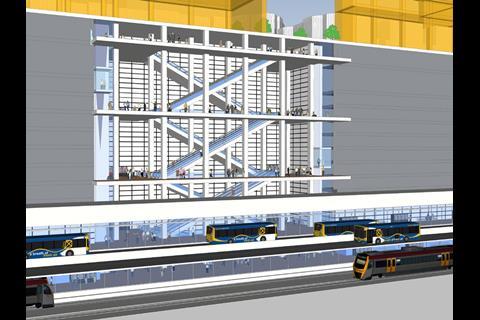 AUSTRALIA: The Queensland state government has announced plans for a 5·4 km double-deck tunnel in Brisbane with a twin-track railway on the lower level and a two-lane busway on the upper level.

‘This is a once-in-a-generation opportunity to transform Brisbane into a world city with a public transport system to match,’ said Transport Minister Scott Emerson on November 17.

The Underground Bus & Train project would link Dutton Park in the south with Victoria Park at Herston in the north, crossing beneath the Brisbane River. There would be new stations with two rail and two bus platforms up to 40 m underground at Woolloongabba, George Street and Roma Street.

The cost of UBAT is estimated at A$5bn, which is cheaper than the previous government’s separate proposals for an A$5·2bn Cross River Rail tunnel and the $2·8bn Suburbs 2 City bus project.

A full environmental impact statement setting out the exact UBAT alignment is to be released in 2014, and the government intends to fast-track the project with a view to starting construction in 2015. Work is predicted to take six years, with the 15 m diameter tunnel requiring the largest TBM ever used in Australia.

Queensland Treasurer Tim Nicholls said the state would investigate ways to fund the project, including infrastructure bonds and financial tools ‘much more innovative than simply just going out there and asking for the government to pay for it’.

On completion in 2021 the project would more than double the number of buses and trains able to cross the river in the morning peak, and relive the Merivale railway bridge which is expected to reach its maximum capacity by 2020.

‘The project will result in significant travel time savings across the suburbs’, said Lord Mayor Graham Quirk. ‘The CBD and adjacent suburbs will need to accommodate an additional 130 000 workers in the next 20 years and we need to improve public transport capacity to accommodate this growth by improving the network. It achieves the outcomes we identified in the Suburbs 2 City study and will take up to 200 buses off CBD streets in the morning peak and reducing 100 buses per morning peak hour on the Captain Cook Bridge.’