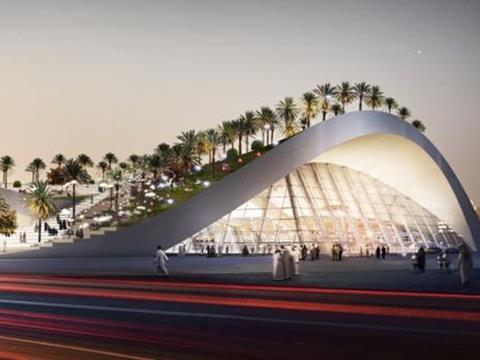 SAUDI ARABIA: Riyadh metro project promoter ArRiyadh Development Authority has selected a design by Gerber Architekten of Germany for Olaya station, one of three major stations intended to create landmarks which 'will transform Riyadh streets as they become the most visible elements of the city's new world-class public transport system'.

Located at the intersection of lines 1 and 2 between Olaya Street and King Fahad Road, close to the Kingdom Tower and King Abdullah Road, the station will feature elevated public gardens and an undulating roof inspired by desert sand dunes. A large, open entrance hall will allow visitors to see across all four storeys of the building, including the two metro lines, a mezzanine level with shops and food halls and an open concourse housing the ticket barriers.