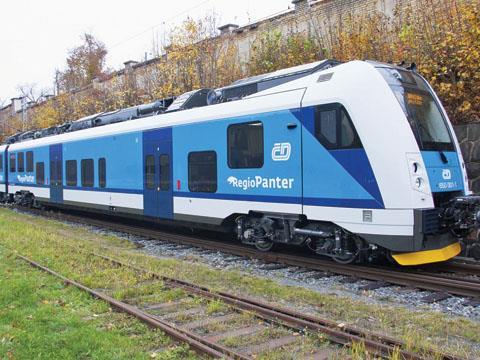 ČD intends to deploy the latest batch of EMUs on services between Plzeň and Horažďovice. However, this is subject to the region securing funding under the EU’s Transport Operational Programme II; if this cannot be agreed, ČD will pay for the EMUs from its own resources and use then elsewhere.

The order has been placed as an option within a KC1·2bn framework contract for 11 EMUs signed in February 2015. The first two have been deployed since December 2015 on regional route S2 from Mosty u Jablunkova via Český Těšín, Karviná, Bohumín and Ostrava to Ostrava-Mošnov airport.

The two-car 53 m long EMUs have a power rating of 1 360 kW and a maximum speed of 160 km/h. The 65% low -floor, air-conditioned vehicles have 147 seats, space for bulky luggage, prams or bicycles, a wheelchair-accessible WC, audio-visual information system, 230 V power sockets and free wi-fi.