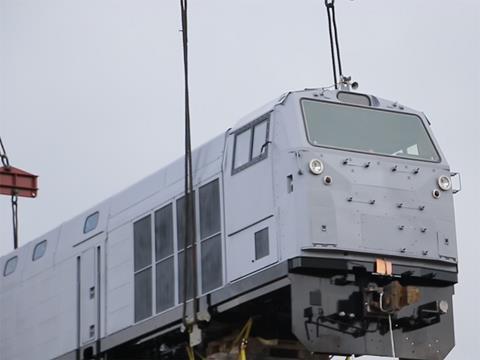 UKRAINE: The first of 30 TE33A Evolution Series diesel locomotives which GE Transportation’s Erie plant is building for national railway Ukrzaliznytsya was delivered to the port of Chornomorsk on September 11.

The second locomotive left the USA on September 7 and is scheduled to arrive on September 25, with delivery of all 30 scheduled to be completed this year. Painting and some final assembly works will be undertaken in Ukraine under a localisation agreement.

The locomotives are to be deployed around Melitopol, Mykolaiv and Mariupol. UZ Chairman Yevgen Kravtsov said the higher efficiency and better reliability of the modern design is expected to release around 40 older locomotives for redeployment elsewhere on the network.

It is envisaged that GE Transportation could supply kits for the local assembly of up to 195 more locomotives under a fleet modernisation framework agreement worth up to US$1bn which was signed by UZ in February. GE Transportation would also support UZ with the modernisation of its existing locomotive fleet under a strategy which the operator expects to finalise by the end of this year.