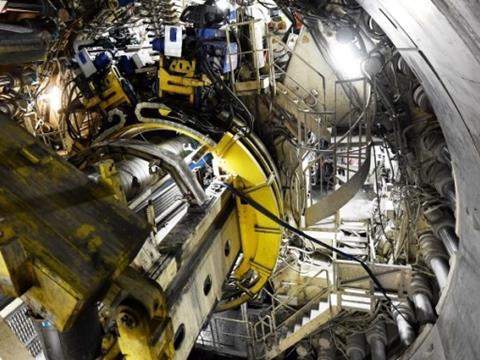 EUROPE: Franco-Italian base tunnel promoter Tunnel Euralpin Lyon-Turin has awarded three project management contracts totalling €90m to oversee civil engineering work on the French side of the border, accounting for around 80% of the 57·5 km tunnel.

Announcing the contract awards on February 1, TELT Managing Director Mario Virano said it was ‘an important step towards the completion of the Lyon – Torino base tunnel'. The alignment between the portal at Villard-Clément and the border has been split into three sections. The process to award a fourth contract for the Italian section is currently underway. The project management contracts cover the boring of access tunnels which will in due course support completion of the main running tunnels.

Lot 1 comprises the 24 km between Villarodin-Bourget and the Modane access shaft, where two tunnel boring machines will be used to drive the base tunnels up to 2 000 m below ground. Valued at €40m, the 10-year project management contract has been awarded to the Alliance Lyon Turin Ingénierie consortium, which brings together Arcadis, BG Consulting Engineers, Neosia, Lombardi Engineering and Amberg.

Lot 2 covers two parallel single-track bores between the access points at Saint-Martin-La-Porte and Le Praz, as well as two bores heading towards Modane from La Praz, which will require the use of three TBMs. The north tunnel on the Saint-Martin – La Praz section includes an exploratory bore which is already being excavated. The €37m project management contract has been awarded to the S2IP consortium of Setec, Systra, Italferr and Pini Swiss Engineers, and is also expected to run for around 10 years.

Priced at €13·7m and running for 4½ years, the Lot 3 contract covers project management for a 5 km section of the base tunnel starting from the Villard-Clément portal, which is to be excavated using traditional tunnelling methods. This has been awarded to Egis, Ingérop, Alpina and Geodata.