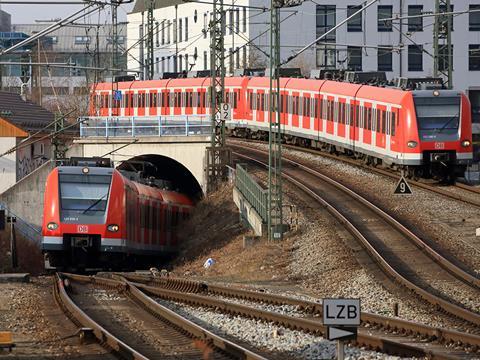 GERMANY: Bayern railway authority BEG has started the tendering process for operations of the München S-Bahn network. This includes plans to refurbish the existing train fleet ahead of its replacement.

Incumbent operator DB Regio is to be awarded an interim contract running for two years from the end of its current contract in December. BEG then expects to award a competitively tendered 12-year contract running from December 2019. This period would see the opening of the second city centre tunnel and procurement of a new fleet, and BEG sees the priority as stabilising the service level during these changes to an already complex network.

A refurbishment of all 238 ET423 four-car electric-multiple units, which usually run as coupled pairs, is due to take place between spring 2018 and 2020. DB Fahrzeuginstandhaltung will undertake the project at its workshops in Nürnberg and Krefeld. According to S-Bahn München Manager Heiko Büttner, this is DB’s largest rolling stock modernisation project.

The ‘absolute priority’ of the modernisation is to increase the trains’ capacity. Until the second city centre tunnel opens in 2026, this is the only way to increase capacity on the network, which BEG says must be done urgently as the population continues to grow. To this end, BEG and S-Bahn München will work with Neomind Design Studio on interior remodelling.

It is envisaged that by reducing the number of seats per four-car EMU from 192 to 166 the total capacity will increase from 544 to 612 passengers. Space under seats will be made available for passengers to store bags and other small items. The consequent improvements in passenger flow would reduce delays caused by longer than scheduled dwell times at stations.

A new real-time passenger information system is also to be installed in the EMUs, which entered service in 2000-05.

In addition to the refurbishment, up to 21 ET420 EMUs are to be purchased, to augment the existing fleet of 15 such trains.

Once the second tunnel opens, BEG expects an increase from 950 to 1 250 train journeys per day, with a commensurate increase from 20 million to 29 million train-km per year.

The new infrastructure would allow a number of service enhancements, including off-peak frequencies on most routes going from 20 to 15 min. Express services are to serve Mammendorf, Herrsching, Ebersberg and the airport at 30 min frequencies, and a ‘Regional S-Bahn’ network would serve the whole area covered by regional tariff authority MVV.

BEG envisages that S-Bahn services will continue to require public subsidy. The contract model would see the operator paid a basic fee with a bonus and penalty regime based on factors including ridership growth, performance and cleanliness. This would be designed to reduce the operator’s exposure to the revenue risks associated with the future changes to services and fleet procurement.

Once services have settled down after the opening of the tunnel, the operation of the network would be tendered as several lots. This is intended to make the services more attractive to potential bidders, increasing competition.