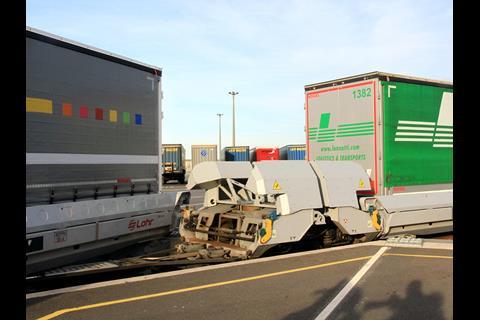 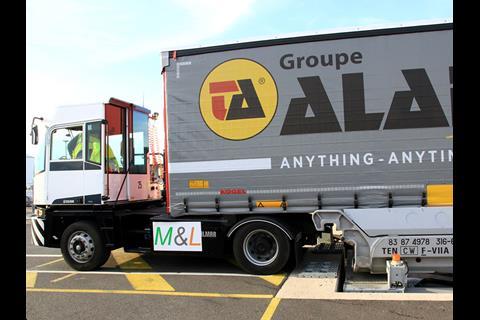 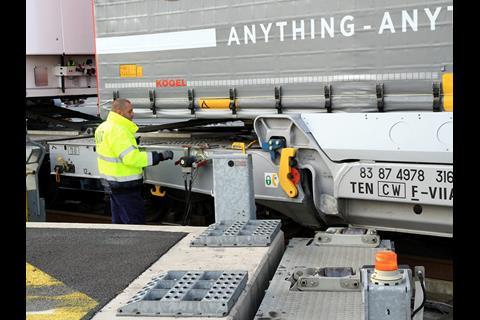 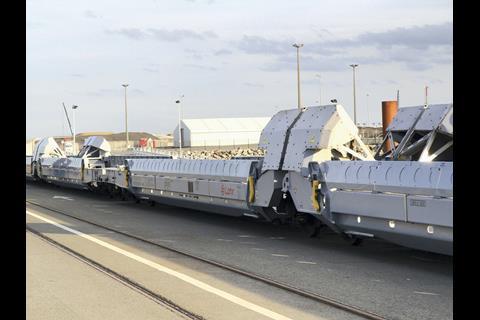 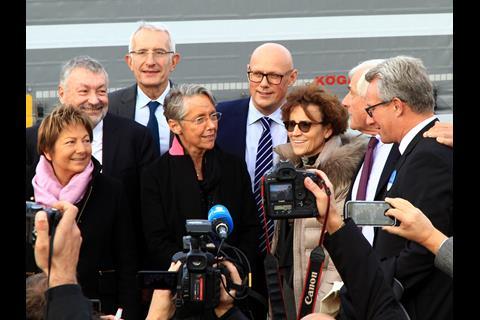 EUROPE: A 'rail motorway' service carrying unaccompanied lorry trailers between Calais and Torino was inaugurated with a ceremony at the Channel port on November 6. This is the fourth route to be launched by SNCF’s rail motorway subsidiary VIIA.

There are initially three round trips per week on the new route, covering the 1 150 km in 18 h. Each train comprises 20 or 21 Lohr Industrie twin-section articulated wagons which can carry two trailers or equivalent units. The wagons are loaded using pivoting elements in around 5 min per trailer, and can be used by all semi-trailers without requiring any investment on the part of road hauliers.

The service uses the Calais rail motorway terminal which opened in 2016 for the launch of the VIIA Britannica route to Le Boulou on the Franco-Spanish border. From Calais trains follow the Artère Nord-Est route via Lille, then south to Chalindrey and Dijon, running via Bourg en Bresse to avoid Lyon before reaching the Maurienne line. In Torino trains share the Orbassano terminal used by VIIA’s trans-Alpine route. Haulage is provided by Fret SNCF in France and Mercitalia in Italy.

VIIA rail hopes to increase the service to two round trips per day in the future, and an intermediate stop in Mâcon is envisaged.

From the Port of Calais there are connections with ferry services to and from the UK. VIIA Chairman Thierry Le Guilloux said Brexit offered an opportunity to develop the service, as unaccompanied trailer transport means there would be no need to pay drivers to wait during prolonged customs checks. The terminal on the site of the former hoverport could also be developed as a hub for shipping connections to Ireland, northern Germany and Scandinavia, including dedicated ro-ro services.

‘The launch of this route confirms our vision of developing unaccompanied trailer traffic in the years to come’, said Jean-Marc Puissesseau, Chairman & CEO of port operator Port Boulogne Calais. ‘With the opening of this new service offered by our partner VIIA, the Port of Calais is becoming the main hub for sea/road/rail interconnections between the north and the south of Europe, and can deliver intermodal solutions to our freight customers within the port itself.’

VIIA carried 106 747 semi-trailers, mobile bodies or containers in 2017, saving an estimated 75 000 tonnes of CO2. SNCF estimates that the new service could save 1·2 tonnes of CO2 per trailer per trip compared to road transport, with President Guillaume Pepy saying the services are ‘an extremely effective tool for shifting from road to rail and for fighting greenhouse gas emissions’.

Minister of Transport Élisabeth Borne said rail motorways were ‘an excellent way to shift to more eco-friendly freight transport’, adding that the launch of the latest route was ‘a striking symbol of the government’s strong commitment to promoting rail freight’. She said there was an ‘urgent’ need to rehabilitate smaller freight lines in France, but did not give a timescale.