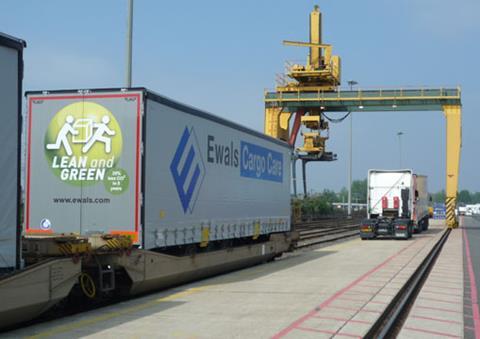 UK: Eurotunnel’s rail freight subsidiary Europorte Channel ran a trial train from Antwerpen to Barking on May 21-22 to demonstrate the feasibility of operating unaccompanied piggyback trains to London via High Speed 1, carrying P400 craneable semitrailers as used in mainland Europe.

The test used a Sdggmiss two-section pocket wagon which had to be approved for operation on RFF tracks in France and over HS1 in the UK. The train carried a pair of ‘megatrailers’ provided by Dutch carrier Ewals Cargo Care, loaded with automotive components for Vauxhall. Ewals confirmed that the company was keen to start a regular rail service to the UK as an alternative to its current ferry operation, using some of the wagons it leases from AAE for regular piggyback flows between Belgium and Italy.

The trial wagon was loaded at the Combinant terminal in Antwerpen on May 21, and travelled to Calais via Mouscron and Lille; haulage was arranged by Belgian open access operator Railtraxx and Europorte France. From Fréthun the train was hauled to London using one of Europorte Channel’s Class 92 electric locomotives. Victa Railfreight provided ‘last mile’ diesel haulage between the HS1 exchange sidings and the nearby John G Russell intermodal terminal.

According to Europorte Channel’s Commercial Director Neil Crossland, a regular service could begin by the end of this year, offering a 7 h journey time between Antwerpen and Barking. The train would operate over HS1 at night, and return the following night, leaving around 20 h for the trailers to be delivered and reloaded for the return trip.