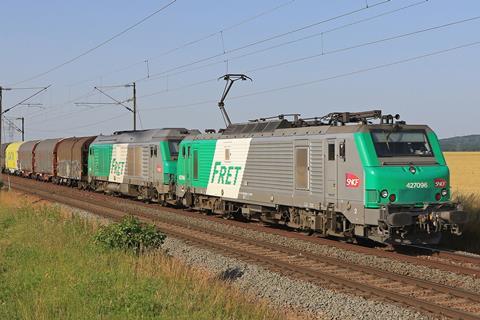 FRANCE: Track access charges for freight trains will be waived until the end of this year and halved in 2021, Prime Minister Jean Castex announced on July 27

Speaking after touring the Valenton intermodal terminal at Bonneuil-sur-Marne in the southeastern suburbs of Paris, Castex, who was appointed Prime Minister on July 3, said that ‘the government is giving a really powerful signal which is the first step in what I will call the rail freight revival plan’.

Promising a further announcement ‘in a few weeks’, Castex also revealed that the government plans to restart and develop rolling motorway services known as autoroutes ferroviaires. Tenders will be called for routes from Bayonne to Cherbourg and the port of Sète near Montpellier to Calais before the end of the year, he said.

Castex also referred to the defunct Perpignan – Rungis overnight freight service, which until July last year carried fruit and vegetables in refrigerated wagons from Spanish producers to markets in Paris, adding that the government would like to see the service extended to run from Barcelona to Antwerpen. Withdrawal of the train led to the traffic switching to road, and the train’s demise became something of a cause célèbre in the French media, symbolising the decline of rail freight. ‘In front of you is a Prime Minister who was badly bruised by the Perpignan – Rungis affair’, Castex confessed.

A new service using containers or swap bodies is planned, with the train terminating at Valenton rather than Rungis, where the freight terminal is being modernised. Use of swap bodies or containers would allow the train, which could be operated by Novatrans, to return to the south of France loaded rather than empty.

Noting that ‘we were very happy to have rail freight carrying food produce during the Covid crisis’, Castex said the government was engaged in a long-term plan to revive rail freight and restructure its management to make it more competitive.

Waiving of freight access fees for the rest of this year will cost the government €63m, and halving next year the same amount, according to the Prime Minister’s office. In return, the government hopes that there will be 20 000 fewer lorries on the roads in 2021, meaning a substantial reduction in CO2 emissions.

Jean Castex is the author of a history book about the Perpignan – Villefranche-de-Conflent railway in southwestern France.