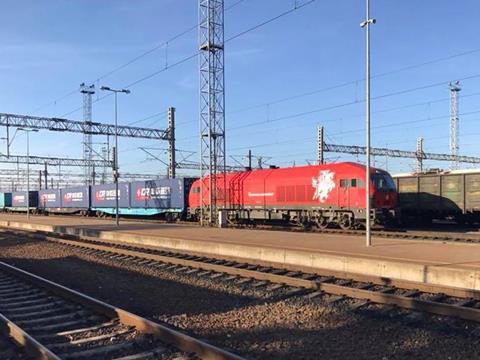 INTERNATIONAL: Containers on what was said to be the first rail freight service to be routed from Łódź in Poland to Chengdu in China via the Russian exclave of Kaliningrad were transhipped between the 1 435 mm and 1 520 mm gauge networks at Chernyakhovsk on September 25.

The 9559 km service via Kaliningrad oblast, Lithuania, Belarus, Russia, and Kazakhstan service was organised by Belintertrans Germany, United Transport & Logistics Co and China’s CRIMT, with the aim of creating an alternative to the route via the busy border crossing between Poland and Belarus at Brest.

It is envisaged that there will initially be one train per day routed via Kaliningrad oblast. Transhipment will be undertaken at Chernyakhovsk until the end of the year when a new crane is scheduled to be commissioned at the Dzerzhinskaya-Novaya intermodal terminal in Kaliningrad.