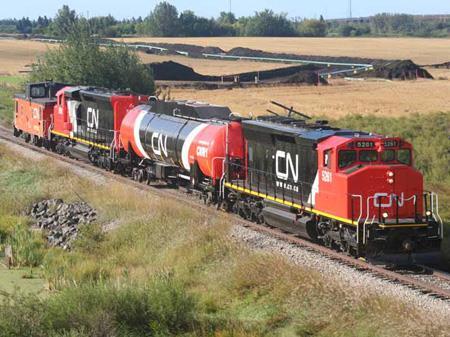 CANADA: Canadian National is testing two Electro-Motive Diesel locomotives which have been converted to use natural gas for 90% of their fuel needs, with diesel used for ignition. CN is also working on a long-term project to develop a natural gas locomotive and a standardised gas tender.

The two 3000 hp SD40-2 locomotives are operating in revenue service on the 450 km Edmonton - Fort McMurray route. They have been retrofitted with natural gas conversion kits supplied by Energy Conversions Inc, which expects that gas/diesel hybrid fuelling will reduce CO2 emissions by 30% and NOx emissions by 70% over a locomotive duty cycle.

Chart Industries upgraded a tank wagon as a tender to carry the gas, which is provided by Encana Corp. Fuelling and maintenance takes place in Edmonton.

CN is also developing a 'state-of-the-art' natural gas engine and standardised tender in partnership with EMD, Westport Innovations and Gaz Métro Transport Solutions. CN is to provide two 4 300 hp SD70M-2 locomotives, and EMD will integrate the natural gas engine and controls, including Westport high-pressure direct injection and gas technologies. GMTS will develop gas liquefaction and distribution systems, with a gas tender to be jointly developed by the project partners.

Laboratory tests are planned for 2013, before trials with prototype locomotives in 2014.