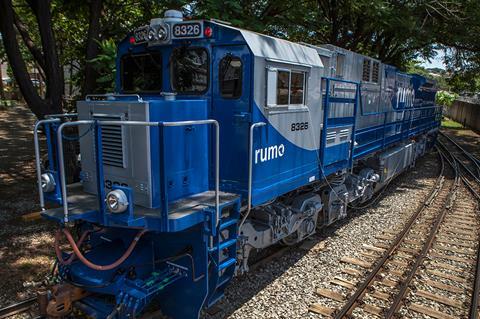 BRAZIL: Governor of São Paulo state João Doria has announced that two moribund sections of the national rail network will be reinstated as part of a R$6bn plan to expand capacity within the state from 35 to 75 million tonnes of freight a year.

One line runs for 369∙1 km from Panorama on the River Paraná to Bauru, and the other 158∙6 km line links Colômbia on the Rio Grande with Pradópolis. The capacity expansion scheme relies on funds allocated under Retomada 21-22, a state programme to relaunch the local economy.

Describing the programme as ‘the largest expansion of rail transport in São Paulo state in the last 50 years and first major element in the 21-22 recovery plan’, Doria said that it would consolidate the state’s position as the main export corridor for Brazil’s agricultural export business, leading to the creation of jobs and income for the state as well as generating concrete benefits for the whole country.

The work will be entrusted to Rumo Logística as the concessionaire for the Malha Paulista network.

Other work in the programme includes double tracking between Itirapina, Boa Vista Velha and Perequê, expansion of passing loops or yards at Rubinéia and Itiripina, construction of bypasses round Mirassol, São José do Rio Preto, Catanduva and Cedral and elimination of conflicts with road traffic in several towns and cities thanks to construction of footbridges and viaducts. A yard would be built at Catanduva and redundant maintenance facilities at Araraquara and Rio Claro closed.