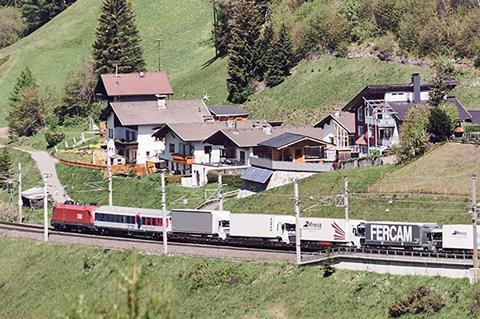 AUSTRIA: Introduction of further restrictions on specific cargoes and certain categories of lorry on the A12 Inn Valley motorway between Langkampfen near Wörgl and Ampass near Innsbruck from January 1 2020 has led to a 32% increase in rolling motorway traffic on the Brenner corridor, reports Austrian Federal Railways.

Since the start of the year ÖBB has been operating 46 rolling motorway services a day, 42 of them on the Wörgl – Brenner route and four between Wörgl and Trento. This is six more a day than in 2019, lifting capacity to 250 000 lorries a year.

With the number of lorries using rolling motorway trains expected to continue rising, ÖBB plans to step up service levels further to provide capacity for up to 400 000 lorries a year. Were available capacity to be fully used, there would be around 1 000 fewer lorries a day on the parallel motorway, ÖBB indicated.

The restrictions introduced in January apply to certain categories of lorry heavier than 7∙5 tonnes carrying a variety of bulk and other goods. An existing ban on steel products, ores, stone, spoil and various other goods was extended to cover cereals, paper products, mineral oil products, cement, lime and plaster, pipes and hollow sections.

The move has re-ignited a long-standing disagreement with the European Commission. On February 14 Transport Commissioner Adina Valean travelled to Tirol for a fact-finding trip that included a visit to the Brenner Base Tunnel, but she showed little support or sympathy for the views of the Tiroleans who have introduced the restrictions in an attempt to reduce pollution that they believe is damaging the Alpine environment.

Having met Tirol Land Governor Günther Platter and Austrian Minister for Climate Action, Environment, Energy, Mobility, Innovation & Technology Leonore Gewessler, Valean was adamant that the Brenner corridor should not become ‘a bottleneck’ to free trade, saying that the lorry restrictions were ‘unacceptable’ and hinting at measures intended to force them to be lifted.

For the moment, Austrian and Tirolean politicians are standing firm, with Platter writing a letter of complaint to Commission President Ursula von der Leyen reportedly expressing surprise and indignation at Valean’s attitude.