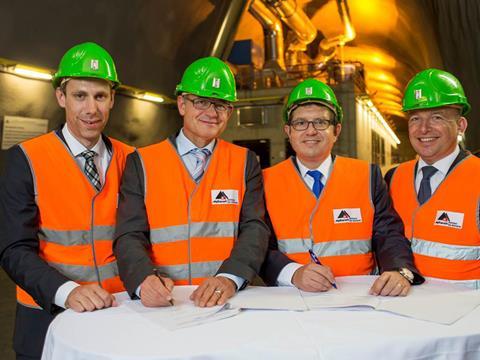 SWITZERLAND: An extension of SBB Cargo’s contract to haul Germany – Italy trans-Alpine transit freight trains on behalf of DB Schenker was signed by representatives of the two companies inside the Gotthard base tunnel on September 25.

DB switched its Gotthard transit contract from BLS to SBB in December 2013. The contract will now run for a further five years until 2020, and cover around 8 000 trains/year on the Gotthard and Lötschberg routes. SBB said the early renewal of the agreement had secured an important contract and ensured it could make investments ahead of the opening of the Gotthard base tunnel in June 2016.

Under separate agreements, SBB Cargo and DB Schenker Rail are also co-operating on import and export traffic between Switzerland and Germany.