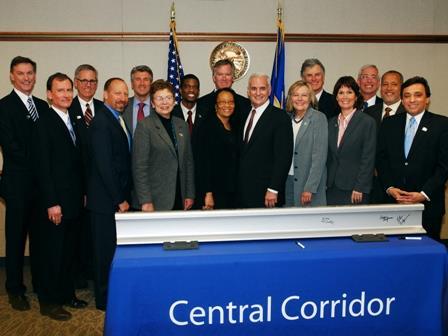 USA: Representatives of the Federal Transit Administration and the Metropolitan Council signed a full funding grant agreement worth $478m in St Paul on April 26.

The federal government is now committed to provide half of the $957m needed to build the 18 km Central Corridor light rail project linking Minneapolis and St Paul. The remainder will be financed by the Counties Transit Improvement Board, which will contribute 30% from funds generated by local sales taxes, the state of Minnesota (9%), and local sources (11%).

The Metropolitan Council is the regional government agency responsible for building the line in partnership with the Minnesota Department of Transportation.

The line will run from a junction with the existing Hiawatha Line near the Metrodome in eastern Minneapolis, from where the LRVs will share tracks to the Northstar commuter rail station at Target Fields. Construction work on the line began in 2010 and is due for completion in 2014. The line will be worked by 31 S70 Avanto light rail vehicles ordered from Siemens in August 2010.

‘The federal grant commitment of $478 million is the largest federal grant ever received in Minnesota for a transportation project’, said Metropolitan Council Chair Sue Haigh. ‘With this agreement, the Twin Cities region will have generated more than $1bn in FTA grants, including $364m for Hiawatha, $157m for Northstar and $478m for Central Corridor.’