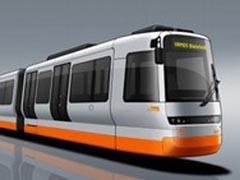 Consortium leader Vossloh Kiepe will supply the electrical equipment for the cars, which are to be delivered from January 2011 to July 2012. They will be assembled by HeiterBlick, the company owned by Kirow and Leipzig transport company LVB which supplied Leoliner low-cost trams to Leipzig and Halberstadt.

Ridership on Bielefeld's four-line metre-gauge network has increased from 19 million in 1998 to 28·4 million in 2008, and further growth is expected to follow proposed extensions to Theesen, Milse-Ost and Hillegossen.

The pre-metro tunnels in the city centre are now running close to capacity, and so MoBiel is aiming to increase the number of passengers carried on each vehicle.

The 34 m three-section HeiterBlick cars will be longer than the current 27 m M8C and M8D cars, and 2·65 m rather than 2·3 m wide. This will increase capacity from 150 to 240 passengers, although there will only be a slight increase in seats as MoBiel's priorities are capacity, accessibility and short dwell times.