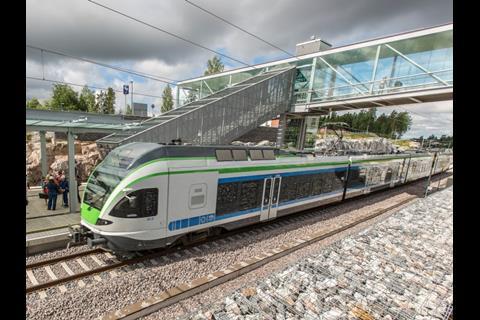 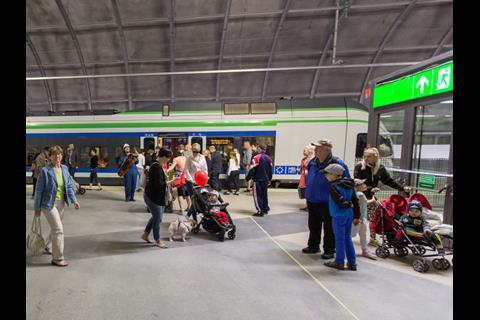 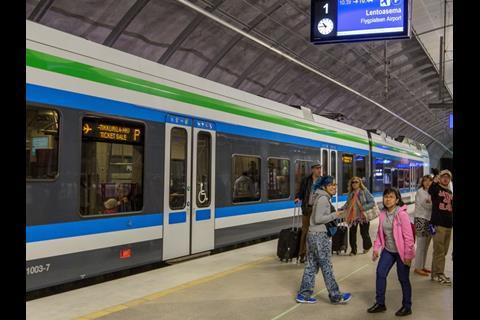 The 18 km route forms a loop joining the Helsinki – Lahti main line and the Martinlaakso branch in the west. After leaving the main line north of Tikkurlia, trains pass over a 500 m flyover to head west, before entering twin bore tunnels under the airport. After surfacing to the west of the airport, services join the Martinlaakso branch in an end-on connection at Vantaankoksi.

The new alignment includes five stations, including the first fully underground main line railway stations in Finland at Lentoasema and Aviapolis. Lentoasema is due to open July 10, with an entrance accessible directly from the airport terminal building due to open in October. Until July 10, airport passengers may use a free shuttle bus from Aviapolis. Passive provision is provided for a further two surface and two underground stations along the route.

Once Lentoasema is open, the journey time from the airport to Helsinki central station will be around 30 min via either the east or the west route. The Ring Rail Line has a design capacity for six trains/h in each direction, and services are provided by four-car Stadler Flirt electric multiple-units.

Tenders for the Ring Rail Line were called in mid-2009, with opening scheduled for 2014. However, this was revised owing to glycol leakage into the tunnels from the airport runway. Trial running eventually started in March 2015. The line is owned by regional transport authority HSL and services are operated by VR.

The €783m project was financed by Finnish transport agency Liikennevirasto (€509m), the city of Vantaa (€244m) and airport authority Finavia (€30m), which is contributing to the construction of Lentoasema station. The project received €44·8m in TEN-T funding from the EU.