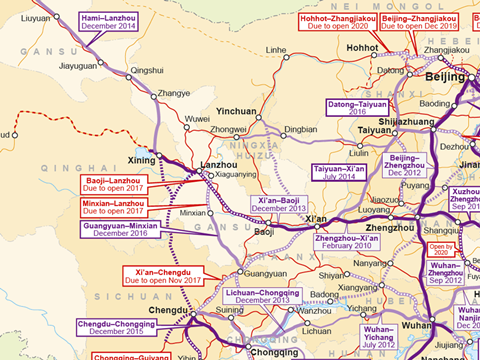 CHINA: The 401 km high speed line between Baoji in Shaanxi province and Lanzhou in Gansu province opened on July 9, following a period of test running which had begun in May.

The latest section of the national high speed network links the existing high speed line from eastern China to Xi’an and Baoji which opened in December 2013 with the 1 776 km route from Lanzhou to Urumqi which followed a year later.

Construction of the 401 km Baoji – Lanzhou route with eight stations began in 2012. Trains run at speeds up to 250 km/h, reducing the journey time between the cities from around 5½ h to 2 h while also freeing capacity to enable more freight to be carried on the conventional line to the western border and Europe.