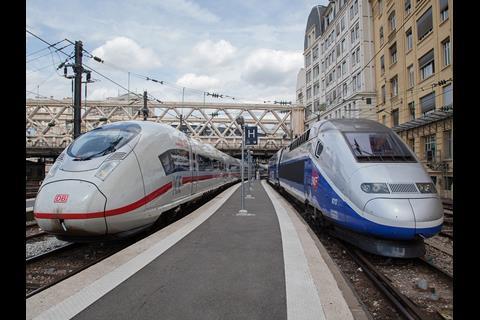 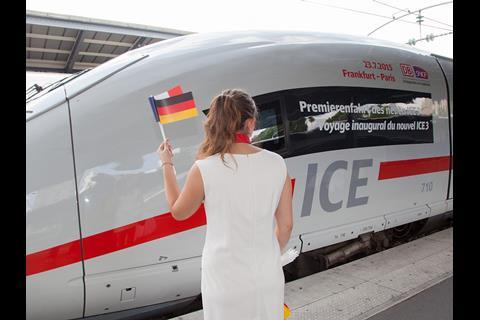 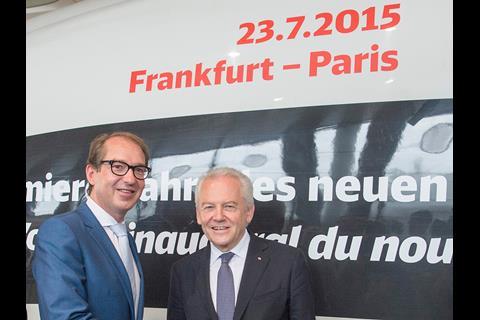 EUROPE: The ceremonial launch of Deutsche Bahn Class 407 trainsets on the Frankfurt to Paris Est route on July 23 was followed by the signing of an agreement to extend DB and SNCF’s Alleo cross-border operating partnership for a further five years to 2020.

Around 12 million passengers have travelled on ICE and TGV services between France and Germany since the launch of the Alleo partnership when phase one of LGV Est opened in June 2007. There was a 44% increase in ridership from 2008 to 2014, and 4% growth in the first half of 2015.

Speaking at the signing ceremony, SNCF President Guillaume Pepy said the partnership had strengthened the links between the two countries and two companies, with on-train and technical staff and management having learned much from each other. ‘DB and SNCF are often in competition, but we also know how to co-operate when it is in the interests of our customers and our two countries’, he said.

The opening of the Baudrecourt - Vendenheim second phase of LGV Est in 2016 is expected to reduce journey times by 30 min, putting Stuttgart 3 h 10 min and München 5 h 40 min from Paris. There will be a fifth daily return service from Paris to Stuttgart and a sixth to Frankfurt, with two Frankfurt trains operating via Saarbrücken and two via Strasbourg from where there will be a TGV connection to Marseille.

The Class 407 Velaro D is the latest variant of DB’s ICE3 family, and the fourth generation of Siemens’ Velaro. It offers 444 seats, 31 more than the Class 406 design it succeeds, and includes a 16-seat dining car. It also meets the latest accessibility standards with the provision of a wheelchair lift, and has lower energy consumption than the previous model.

The Class 407 entered passenger service in Germany on December 21 2013. Regular services to Paris began in June 2015, after authorisation for operation in France was granted in April; multiple operation is not yet permitted in France.