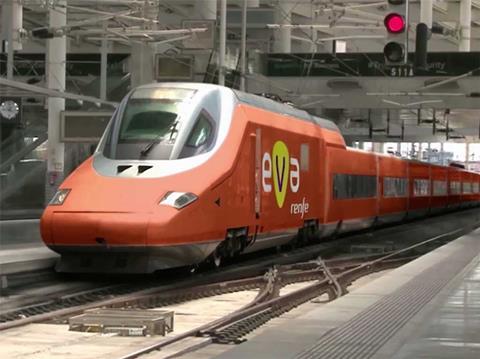 Having captured 65% of the combined rail and air market between the two cities, RENFE is now targeting those sectors of the market which currently prefer to travel by car, namely small groups, young people and families. Eva would offer a personalised end-to-end service with prices up to 25% less than current high speed fares.

While the concept is to be developed over the coming months through customer focus groups, RENFE says that Eva would a offer a ‘100%-connected’ journey experience, including multi-modal digital ticketing that could feature biometric passenger identification. Train interiors would be designed to accommodate the needs of business passengers as well as small groups of two, four or six people.

Before rolling out the concept to other routes, RENFE plans to start operations next year with five daily Eva services each way between Madrid and Barcelona El Prat via Camp de Tarragona. According to the national operator, this route offers the best potential for attracting passengers from other modes, with parking and interchange facilities at El Prat enabling the greater Barcelona area to be served more effectively.