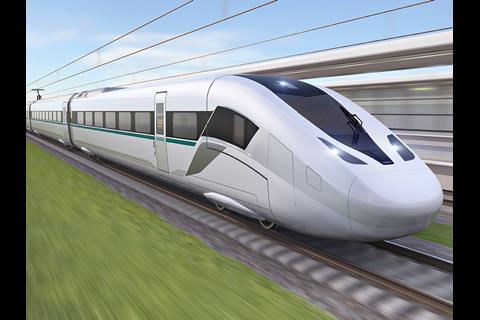 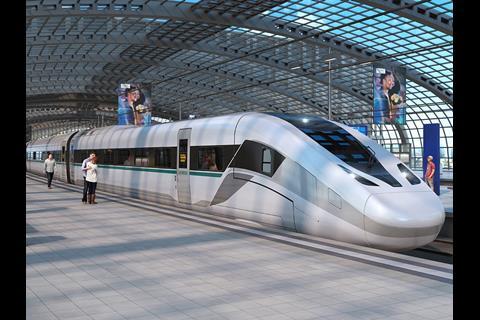 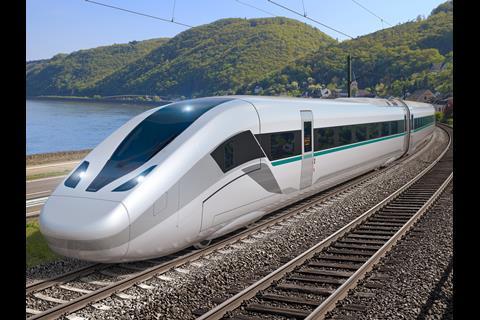 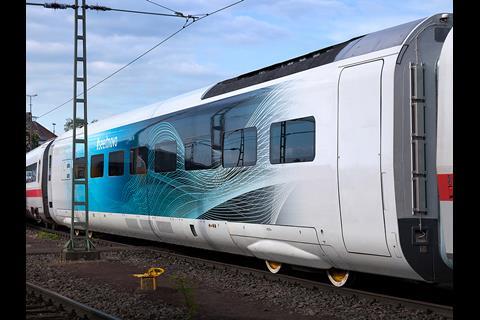 GERMANY: Siemens unveiled its Velaro Novo concept for the next generation of high speed train on June 13, saying the first sets could be in service in 2023.

The 8 MW Velaro Novo is designed for operating speeds of between 250 and 360 km/h, and would set ‘new standards’ for efficiency and sustainability, using 30% less energy when running at 300 km/h, Siemens said.

The trainsets would be 15% lighter than previous Velaros, benefiting from friction stir welded bodyshells and silicon carbide auxiliary converters. Aerodynamics would be improved, with bogie housings reducing drag to generate a 15% energy saving and pantograph housings and covered roof-mounted equipment saving another 10%.

The car bodies would be based on an ‘empty tube’ concept, with the use of ceiling and wall-mounted equipment cabinets to increase the passenger space by 10%. This would enable the interior to be furnished according to an operator’s wishes, and make the design ‘future-proof and flexible’ with the ability to reconfigure the interior to meet changing needs. The aisles would be widened from 524 to 535 mm.

Maintenance costs would be reduced by up to 30% through the use of monitoring technology.

Siemens began developing the Velaro Novo concept in 2013. In April this year it began testing elements of the design at up to 331 km/h as part of the ICE S test train operated by DB Systemtechnik.

‘The new train writes a new chapter in the Velaro’s success story and enables operators to offer improved passenger comfort and economy over the train’s entire lifecycle’, said Sabrina Soussan, CEO of Siemens’ Mobility Division. ‘What we are presenting today is the result of five years of development: a platform offering uniquely optimised energy consumption and maintenance costs, as well as maximum flexibility and reliability.’