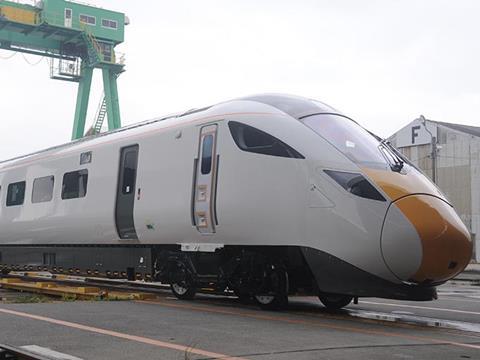 UK: The first of three pre-series Class 800 intercity trainsets ordered under the Department for Transport’s Intercity Express Programme has begun low-speed running trials on the test track at Hitachi’s Kasado factory in Japan.

The first of the three bi-mode sets is expected to arrive in Britain early next year for trials on the East Coast Main Line, although Hitachi is discussing the possibility of using the Old Dalby test track.

A set of full-size vehicle mock-ups at industrial premises near Warwick has now been seen by more than 2 000 ‘stakeholders’ as the final part of an iterative process to finalise the design details well before the trains enter commercial service. Put together by DCA Design International, the mock-ups consist of a cab segment and sections of two cars with the interiors fashioned to replicate all the different areas of the TSI-compliant interior.

The cab is based on that of the Class 395 supplied by Hitachi for Southeastern services on High Speed 1, with some changes made following consultation with staff. Provision has also been made for driver-only operation.

The catering area is located at the outer end of one end car behind the cab and equipment area. A separate entrance and vestibule behind the cab is provided for catering staff. Hitachi says four catering levels are possible, but the DfT specification only covers Levels 1 and 4. Level 1 is a full galley, Level 2 would be a mix of a shop and buffet, Level 3 would be a larger shop, and Level 4 is a trolley.

A distinctive feature of the bi-mode trains will be the difference in floor heights between cars with and without diesel engines; the higher floor of cars with underfloor engines requires a transition slope at the end of the car, which may surprise passengers expecting a level passage between cars. A nine-car set will have five coaches with underfloor engines supplied by MTU, and a five-car will have three. The Class 801 electric trainsets will also have one underfloor diesel powerpack to provide emergency power instead of relying on back-up batteries.