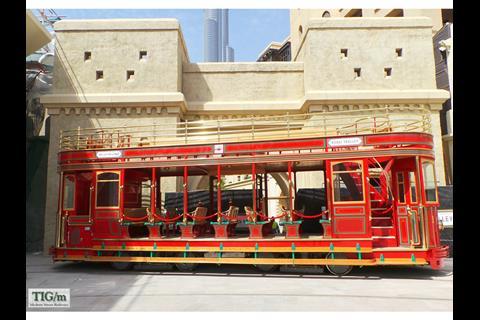 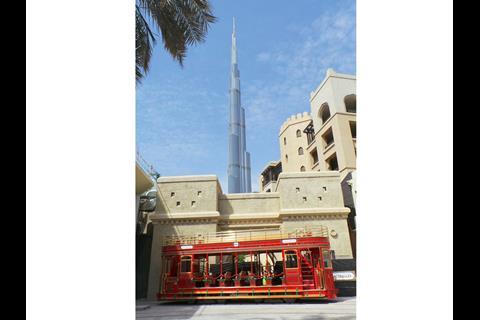 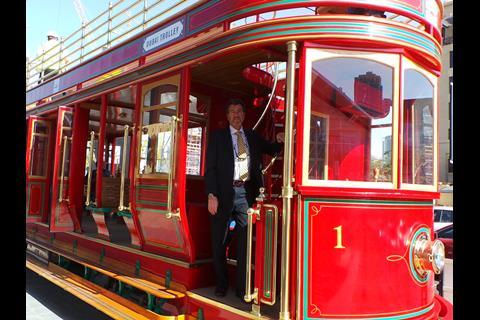 UAE: The first of a fleet of fuel cell powered double-deck heritage-style open-top trams is now undergoing tests on the initial section of a line which will serve Emaar Properties’ Downtown Dubai development.

Emaar says the tramway will operate between 16.00 and midnight on weekdays and from 15.00 to 23.00 on weekends, providing convenient and easy-to-access transport around the 200 ha Downtown Dubai site as well as being an ‘exotic’ and ‘fun oriented’ visitor attraction passing landmarks including Burj Khalifa and the Dubai Mall.

The standard gauge line is being built in three phases which will eventually form a 7 km loop around Downtown Dubai. Phase one will run for 1 km on grassed track in the median of the orbital Sheikh Mohammed Bin Rashid Boulevard, with three stops serving The Address and the Manzil Downtown and Vida Downtown hotels. The stops will have an ‘aesthetically appealing façade’ and air-conditioning.

The double-deck trams are being custom-built by US firm TIG/m under a contract awarded in 2009. They will use fuel cells to generate electricity for traction, with batteries for to recover regenerated braking energy. TIG/m is also installing the plant for producing hydrogen on-site by electrolysis of water.

They will have a capacity of 50 passengers, with an open upper deck and an air-conditioned lower deck with windows which can be removed in the cooler winter months. Emaar describes their livery as ‘resplendent in bright red with aesthetic gold pin-stripes and green trim colours and have Arabesque design features’. The trams will be capable of a maximum speed of 80 km/h, although the service speed will be 16 km/h. A total fleet of 10 cars is envisaged