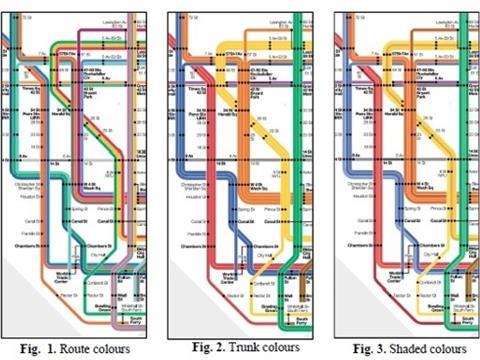 MAPS: It might be possible to use software to automatically detect features of metro maps which cause passengers to make mistakes in journey planning, researchers believe.

They recruited 300 participants who used an on-screen map to plan journeys between randomly selected station pairs. Each journey contained one or more ‘navigational hazards’, where lines switched places, merged or passed under others.

The initial aim of the study was to determine the effect of commonly used colour-coding schemes on the usability of the map as measured by accuracy and speed of navigation.

The three colour-coding schemes studied were ‘route colouring’ where each end-to-end route is coloured distinctly; ‘trunk colouring’ where routes are coloured according to the corridors they run along; and the intermediate ‘shade colouring’. Participants’ performance when navigating from one station to another was determined by recording how many mistakes they made and how long they took to complete each task.

The study also found that ‘navigational hazards’ had a large impact on usability than the choice of colour-coding scheme.

Where two routes merge, route colouring remained the fastest and most accurate means of identifying the correct route. But where riders have to move from one branch to another trunk colouring was more effective.

The researchers are now carrying out further analysis with a view to developing software for the automated detection and correction of hazards when designing maps.