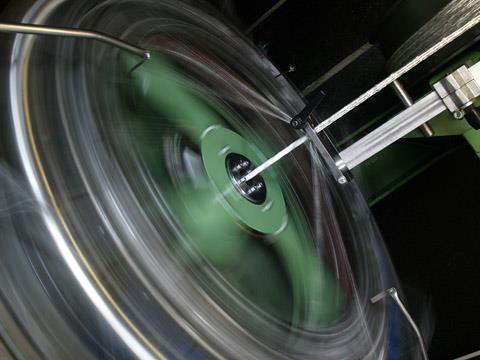 'THIS IS a cost-efficient solution, not a cheap solution', notes Harald Büthe, Nexans' Product Development Engineer, of the DuoTrack cabling application that Nexans is introducing on the Odenwaldbahn in Hesse, Germany.

DuoTrack is a trunk cabling installation process that incorporates not only a cable, but also all the related cable-laying, securing and branching equipment. The pilot will see cable installed on around 100 km of line between Darmstadt, Wiebelsbach and Eberbach.

The project began in September 2006 and cable-laying is scheduled for completion at the end of the month. DuoTrack gained EBA type approval in December 2006, and the Odenwald trial is designed to assess its suitability for deployment on DB's non-electrified regional lines. Further research for DuoTrack application on a main line is being undertaken between Hamburg and Lübeck.

Central to the concept is the shift away from laying cables in lineside troughs. Instead, DuoTrack has a single cable clamped to the running rail. Both copper and optic-fibre lines are integrated in a 'figure of eight' cable protected by a high-density polyethylene sheath, aluminium screen and corrugated stainless steel tape for rodent protection.

Advances in copper cable and optic-fibre technology allow the combined cable to carry a range of communications links. The optic-fibre core will connect the electronic interlockings currently being installed by DB Netz as part of its wider refurbishment of the Odenwaldbahn, and the copper cable will carry low-voltage power supplies, signalling and level crossing controls. Development of increasingly-secure optic-fibre links raises the possibility of renting out capacity to third parties, such as broadband internet providers, offering an additional source of revenue for regional lines in the future.

The evolution of DuoTrack has partly been driven by the need to cater for GSM-R communications which underpin Ertms. DB Netz has been closely involved in the three-year development programme that has culminated in the Odenwald project. Ertms roll-out will necessitate the replacement of vast quantities of outdated or incompatible communications equipment.

Nexans has worked with partner Contec to develop a tailor-made installation method that is up to 10 times quicker than conventional cable-laying.

Contec's laying train comprises a Unimog, a trailer wagon with four cable drums and a load-balancing regulator. A laying arm runs on the rails just behind the wagon to drop the cable accurately into position on the outside edge of the running rail as the Unimog proceeds at around 3·5 km/h. Nexans believes Contec's bespoke mountings, together with longer cable lengths, will be sufficient to prevent theft and vandalism.

While DuoTrack requires an additional member of staff when compared to a conventional cable-laying team, Büthe suggests the approach will generate cost savings of up to 40%, a significant margin given the financial constraints affecting many regional railways.