High Speed Rail is firmly established as an attractive and environmentally-friendly transport mode. The UIC Highspeed 2008 conference in Amsterdam on March 17-19 will debate the technical, political, commercial and environmental issues that will shape the evolution of high speed rail travel over the next few years 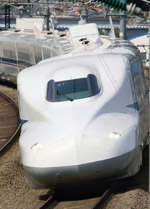 Following a number of success stories, initially in Japan, then in Europe, and more recently in Asia, high speed rail has definitively become one of the major axes for the development of rail transport across the world.

During 2007 we saw considerable progress in the development of high speed rail in many countries. For example, last year marked the start of commercial operation on the first phase of LGV Est Européenne linking France to Germany, where a new world speed record for steel-wheeled trains was established; the start of commercial service on the Taipei - Kaohsiung route in Taiwan; and the inauguration in December of two further routes in Spain. In 2007 all of Europe's high speed operators recorded a steady increase in traffic, including international services such as Thalys and Eurostar.

In 2008, the total length of dedicated high speed lines around the world is expected to break the symbolic 10 000 km mark, with the completion of several more routes, ranging from the Madrid - Barcelona line in Spain to the 115 km Beijing - Tianjin line; China's first 300 km/h route is due to be operational in time for the Olympic Games in Beijing this summer. This year should also see the start of high speed operation in Turkey on the first sections of the Ankara - Istanbul corridor.

Other projects nearing completion include two routes in Belgium, from Liège to the German border and Antwerpen to the Dutch border, the Milano - Novara line in Italy and the HSL-Zuid route linking Amsterdam and Rotterdam with the Belgian border. This last was our primary incentive to hold the UIC Highspeed 2008 conference in the Netherlands.

And with the prospect of market liberalisation, we are starting to see the emergence of private-sector competition in Europe's high speed rail sector, challenging the status quo of dominance by the national railways. NTV has made a clear statement of intent with its order for 25 AGV trainsets (p146) and an option for another 10. And I believe that other players are likely to emerge in the next few years.

Although Europe, Japan and China have been making the running so far, I believe that 2008 will be the year when high speed rail goes truly global. Decicions have been taken to launch high speed rail projects in Morocco, and more recently in Argentina. Ambitious projects are taking shape in Russia, India, Iran, Saudi Arabia and Brazil. According to our latest forecasts, the high speed network could reach a total length of 35 000 km in the next 15 years.

High speed rail has two main advantages, which underpin its current success and will drive further expansion in the future. The first is its market efficiency as a transport mode.

New dedicated high speed lines offer fast, safe and reliable links between city centres over distances varying from several hundred to more than 1 000 km. Through running on and off the conventional rail network enables high speed trains to offer attractive travel times between a large number of domestic and/or international destinations. And connecting regional services will spread the benefits even further. With the latest generations of TGV, ICE, AVE or ETR trainsets able to offer commercial speeds up to 300 or even 320 km/h, high speed rail is now a highly-efficient passenger transport mode for business and leisure travel.

Air travel remains the main competitor in the business sector, but the introduction of stricter regulations and more security checks in airports can add several hours to the journey time. In part this has helped to drive the success of high speed trains over medium distances.

Commercial success is also built on a host of customer-oriented innovations, such as the introduction of modern internet-based information and ticketing systems, as well as new products and fare schemes, such as 'low cost' trains with innovative on-board services, like iDTGV or TrenOK. Improved connections are essential, both at airports and with local public transport, as well as regional trains. High quality services are being specially tailored to make rail travel enjoyable, with lounges for business travellers in main stations, and on-train entertainment for leisure travellers and families with children. Railway companies are now able to offer their customers a top-quality product in terms of speed and comfort.

Technological advances are also bringing new operating methods to the high speed sector, which is starting to grapple with challenges such as ETCS and GSM-R. Though the initial complexity is high, the use of interoperable systems will facilitate more cross-border services in the future and optimise cost effectiveness for the train operators.

Whilst market efficiency is helping to drive up patronage, I believe that the second key advantage of high speed rail may be more significant in determining future evolution of the mode. High speed rail offers benefits to the whole of society in terms of its contribution to sustainable development.

As a high-output transport mode, high speed rail offers unchallenged benefits in terms of safety, low energy consumption, virtually no pollution and minimal land-take. It is a powerful tool at the service of town and country planning and of economic and social development at national and European level alike.

The many trump cards that rail holds means that the development of high speed networks should readily qualify for a variety of funding sources, as it offers benefits to all the stakeholders involved: EU Member States, regional and local authorities, as well as the railway companies themselves.

Through its High Speed department, UIC provides support to its members wishing to introduce or develop high speed rail, working in the fields of technical harmonisation and interoperability, and by facilitating exchanges on all operating, commercial, economic and financial aspects. UIC Highspeed 2008, our sixth world congress on high speed rail, will bring together many of the decision-makers involved, promoting exchanges and decisions that will drive further implementation of this increasingly-significant, efficient and sustainable transport mode.

'High speed rail offers benefits to the whole of society in terms of its contribution to sustainable development. It is a powerful tool at the service of town and country planning and of economic and social development'