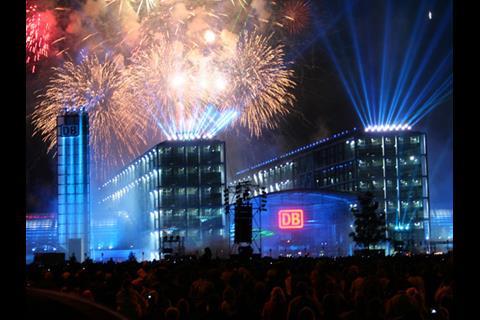 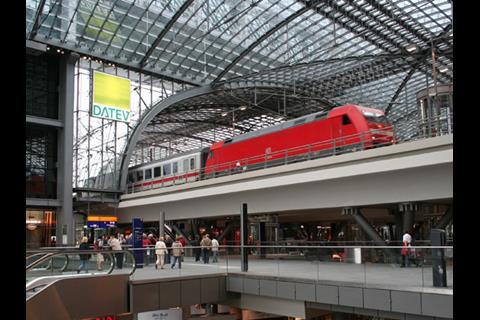 show caption
Ralf Roman Rossberg reports on the opening ceremony for Berlin Hauptbahnhof, where east-west and north-south services meet at the geographical centre of the German capital

GERMANY: May 26 was party time in Berlin. To mark the opening of what Deutsche Bahn AG calls 'Europe's largest interchange' and the culmination of a €10bn programme to remodel Berlin's rail network, Chancellor Angela Merkel alighted from a special ICE service at 18.03 onto a red carpet at the station's pristine underground platforms.

Her arrival was the signal for formal celebrations with around 1 000 guests, among whom was EU Vice-President Günter Verheugen. With the formal events over, about 100 000 visitors were treated to a spectacular light and firework show as the station was unveiled to the public with partying continuing until 03.00 next morning. The event was sadly overshadowed by a youth who ran amok outside the station, stabbing and wounding 35 people, some of them seriously.

'With the new service pattern and the main station as a symbol, Berlin is once more a world metropolis for rail travel', proclaimed DB Chairman Hartmut Mehdorn. With east-west trains meeting north-south services at a single central station, 'an old dream has come true', he said, forecasting that the huge complex would become a magnet for the public.

Berlin Hauptbahnhof lies on the site of the former Lehrter station. Here a new 9 km north-south main line intersects the elevated east-west Stadtbahn, although at this point the new line lies in the 3·4 km Tiergarten tunnel that also takes it below the River Spree just south of the new station.

The special train had set out from Leipzig, where Federal Transport Minister Wolfgang Tiefensee highlighted the culmination of several major rail projects this summer, including completion of the Nürnberg - München high speed route and upgrading of the Berlin - Leipzig line for 200 km/h. He said that 'we now want to hurry up and finish the route from Leipzig via Erfurt to Nürnberg', but even completion by the target date of 2016-17 was 'very ambitious'. The government had halted work in 1999 because of a shortage of funds, and even though work restarted in 2002, progress has been very slow.

Berlin Hauptbahnhof will be served by up to 1 200 trains a day. North-south services call at the four low-level island platforms with eight tracks, while east-west main line trains use four tracks five levels above. A further two high-level tracks carry four east-west S-Bahn services that call at 3½ min intervals.

The main entrance at ground level provides access to taxis and seven bus routes; plans envisage that trams will also call here in the future. The station has 900 car park spaces and 15 000 m² of space for retail outlets; these are expected to remain open seven days a week until 22.00.

While connections between main line, regional and S-Bahn services are excellent, links to the U-Bahn leave much to be desired. The planned extension of Line U5 from Alexanderplatz was postponed as an economy measure, but a short section between Hauptbahnhof, Bundestag and Brandenberger Tor is due to open at the end of the year. Known as U55, this is isolated from the rest of the U-Bahn network. Only in 2010 will work begin on the 3 km link to Alexanderplatz for completion by 2020.

In technical and architectural terms the new station is a masterpiece (RG 9.02 p525). Designed by Gerkan, Marg & Partner of Hamburg, it is spacious and flooded with natural daylight which penetrates to the low-level platforms. A 321 m long glass roof with a 40 m span and solar panels covers the east-west platforms, and two 46m high office buildings lie at right angles across the Stadtbahn. One of these is expected to be occupied by DB AG when fitting out is finished in two or three years' time.

Reorganisation of Berlin's rail services from May 28 sees most long-distance trains, including those from the upgraded 230 km/h line from Hamburg, routed through the north-south tunnel, although trains from Magdeburg and Nordhausen in the west and from Poland in the east continue on the historic route. Apart from the S-Bahn with its dedicated tracks, most services on the Stadtbahn are regional trains; three routes were added with the timetable change.

Accompanying construction of the north-south tunnel were major works to ensure good access from the main lines that converge on Berlin. In the south the S-Bahn interchange at Papestrasse was rebuilt as Südkreuz, which is served by nearly all ICE trains bound for Leipzig, Halle and Dresden.

To the north the station at Gesund-brunnen has been rebuilt and is served by long-distance trains for Rostock, Stralsund and Szczecin. Local opposition prevented the name being changed to Nordkreuz.

The intermediate station at Potsdamer Platz is now served by regional trains, providing further connections to S-Bahn services. Stations at Jungfernheide and Lichterfelde Ost have also been rebuilt to accommodate regional trains.

In the future the former alignment of the Dresdner Bahn that once carried trains to and from Praha and Wien is to be restored when the airport at Schönefeld is rebuilt as Berlin's future main airline hub. This will require 13 km of alignment to be rebuilt between Priesterweg and Blankenfelde.

Less clear is whether the former Potsdamer Stammbahn north and south of the city centre will be reinstated. Only 9 km of tracks would need to be rebuilt between Zehlendorf and Griebnitzsee to provide faster access for trains from Magdeburg, but opposition from landowners and conservationists represents a major obstacle.