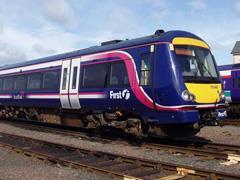 'DATA has been pouring off trains for 10 years or more now,' says Jeremy Lovell, Business Development Leader, Orbita, at Bombardier Transportation. Modern traction, heating, ventilation, braking, CCTV and information systems bristle with sensors and monitoring equipment, which produce a growing stream of detailed performance data. But it has proved hard for operators to spot significant information amongst the masses of routine data, and then feed the results into their maintenance planning.

This is where Bombardier's Orbita concept comes in. 'There is a vast portfolio of hardware and knowledge available, but how do we target this for the customers?' asks Lovell. The answer lies in automation, with modern technology allowing computers to do the spadework. 'Data processing is now straightforward in a way that it wasn't even four years ago, and this has opened up the opportunity to provide train operators with tailored, dynamic decision support capabilities which were simply not available in the past.'

Lovell stresses that Orbita is not simply transferring an established system from other industries. 'Railways involve both rolling stock and fixed infrastructure, which involves a lot of complexity not found in other sectors.'

'You don't buy Orbita, you join it,' he adds, keen to emphasise that Orbita is a set of processes, people and tools which are brought together. 'It is not a piece of software in a box.'

There are currently more than 1 400 vehicles monitored through Orbita, with on-train systems continuously logging events such as door operation or brake applications. The trains regularly 'phone home' to Derby in central England, where Bombardier has established the first of an expanding network of international control centres. The logs of routine events and alerts of anything untoward run to several gigabytes of data per day, and include measurements of temperatures and system response times. Messages can be sent to the control room as soon as an event occurs, or in batches at intervals if continuous data links are unavailable. 'We are moving towards real-time, but it doesn't have to be real-time to be effective', stresses Dr Michael Provost, Head of Predictive Services Engineering.

Data is automatically analysed and displayed graphically, allowing faults to be clearly and rapidly identified. Reports are generated and categorised as green, amber or red depending on how urgently the vehicles require attention. Control room engineers can drill down into the data, using sophisticated tools to filter out the effects of events such as starting up the engines, which produce outliers on graphs of performance.

The reports are sent to the depots, with instructions telling front-line staff what to look for and where. Depot staff can contact the control centre to reach specialist engineers if a difficult or unusual fault is found, enabling them to obtain detailed technical advice and assistance when necessary. Reports can be viewed online, allowing train operators to check performance.

Orbita's strength is its ability to transform vast quantities of data from 'a stream of digits, to instructions on what to do to the vehicle', explains Provost. 'We filter the mundane events, and flag the ones which need action', freeing depot staff to focus on their core tasks.

First ScotRail's fleet of 59 Class 170 Turbostar three-car DMUs has been in Orbita the longest. At present 99 First ScotRail cars are fitted with the Mitrac train control system, which is to be rolled out across the entire fleet to bring all 177 vehicles within Orbita. Each DMU has 12 different onboard systems being monitored, including the monitoring system itself, and around 450 event codes are used. Data is also now being collected from the Class 220, 221 and 222 inter-city DEMUs operated by Virgin Trains, Midland Main Line and Hull Trains, as well as the large fleet of Derby-built Electrostar EMUs operated by Southern and Southeastern. The Electrostars will eventually be followed by the similar EMUs for the Gautrain project in South Africa, which Bombardier will begin building in the next few months.

The control centre records between 80 000 and 100 000 individual events from the First ScotRail fleet each day. A fault which might otherwise have taken longer to notice occurred when a loose ceiling panel was fouling one of the doors of a Class 170. Orbita alerted the control centre that the door was taking longer than normal to close, and excessive forces were being required. These faults are generally caused by passengers blocking the door, but the occurrence of the same error at every stop was unusual and so the train operator was supplied with the vehicle identity and door number, and directed towards the specific problem.

Huge archives of data are being built up, and will continue to grow as more vehicles are brought into the Orbita regime. By identifying the data patterns which occurred before past failures, similar conditions can be identified as soon as they begin to develop and action taken before critical problems occur.

Commercial confidentiality of individual fleet data is assured, but by cross-referencing the data which Bombardier has built up from across its global fleet Orbita will give everyone access to a deeper pool of knowledge about sub-systems, and emerging problems.

Bombardier is keen to overcome the 'silo effect', where disparate teams possess their own technical knowledge but lack the means to pass it on. 'If we find best practice we can plug it in', says Lovell. While working with colleagues from Bombardier in Australia who are keen to exploit Orbita in the region, we found that they have particular expertise in oil monitoring. By extending the team in this way, we can share expertise and avoid reinventing the wheel.'

Advantages of scale mean Orbita could be of equal value to small independent operators and big state railways. Regional franchisees can benefit from the experience and knowledge gained from fleets world-wide, not just their own trains, helping to reduce their costs. As the major operators increasingly follow smaller companies in contracting out their fleet maintenance needs, Bombardier will be able to use Orbita to increase its own capabilities. 'Railways have got to transform themselves, and we want to be a part of that.'

The data allows the development of a holistic view of rolling stock, and a whole-life approach to maintenance. Bombardier believes it is in a strong position as systems integrator, benefiting from economies of scale in problem resolution. When it becomes clear that certain extra information would be useful for maintenance analysis, future trains can be equipped to supply it. For example, recent batches of AGC multiple-units ordered for SNCF can supply data which was not available from the first vehicles.

Bombardier believes that in recent years there has been a transfer of expertise from the big system integrators to their sub-suppliers, and now it wants to bring some of this back in-house to allow a better overview. 'It doesn't make sense to be looking at lots of discrete bits of rail systems,' says Lovell.

Orbita is offered as a support service for all Bombardier's maintenance contracts, whether for full fleet management or, as at First ScotRail, materials supply and technical support. Performance figures are closely guarded, but Lovell describes the increase in reliability from the introduction of Orbita at ScotRail as 'significant' and bringing a financially important reduction in delay-minutes attributed to the operator.

Bombardier has established a five-stage model for its maintenance activities, and aims to progress each of the fleets for which it is responsible through these steps. The first is reliability stabilisation, ensuring consistent performance. The second stage is to move maintenance from unplanned to planned work, with all activities being undertaken to a schedule rather than in response to problems which have arisen. Maintenance optimisation forms the third stage, using long-term data from the Orbita archives to inform a break away from distance or time-based component replacement to a condition-based regime. Bombardier estimates that savings of up to 10% can be made on materials, with environmental as well as cost benefits. Pinpointing the exact causes of failures allows the time between work to be extended in the fourth stage, bringing reduced operating costs as the fifth step.

Orbita allows staff to keep a close eye on stocks of spare parts, ensuring money is not wasted on excess inventory. In addition, stocks of older components can be run down as new parts are introduced.

'This is about changing the philosophy of maintenance', declares Lovell. 'We are sure everyone will go the same way in the future, but Bombardier has the advantage of being the first-mover.'