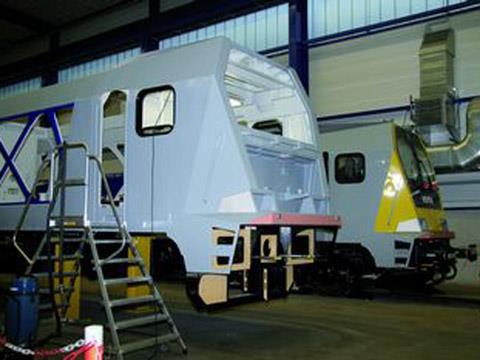 VOITH AG is committed to a strategy of steadily increasing its role in the worldwide traction market. At its 'Fit for the Future' customer day in Würzburg, Voith Turbo set out its ambition to deliver all components needed for propulsion, including drive shafts and axle gears.

The company is seeking to co-operate with all rolling stock manufacturers, particularly in eastern Europe, Asia and maybe Australia. It is prepared to provide engineering assistance to allow train builders to undertake local production of parts for Voith Powerpacks. Voith is aiming to establish a standard six-month delivery time for its products, and plans to service its hydraulic transmissions throughout a 40-year life span.

The Voith Turbo division has diversified considerably since introducing the Powerpack range three years ago (RG 2.04 p106). New this time was the LRVPack for applications of up to 320 kW. Based on a reinforced hydro-mechanical DIWA bus transmission with MAN 2876, Iveco Cursor 10 or Deutz BF4M bus engines, the company says the LRVPack will run for 600 000 km without overhaul. Interest has been expressed by potential operators of diesel light rail vehicles in the USA.

Railpack is based on the T211/T212 bre turbo transmission range of 250 to 450 kW, and is designed for MAN 2842/2876, Deutz BF6M/BF8ML, Iveco V8 or Caterpillar C18H engines. Alstom Ferroviaria and PESA are the biggest customers so far, ordering 212 and 75 packages respectively.

Higher ratings are offered by Turbopack, based on T311/312 bre transmissions and MAN 2842 V12, Cummins QSK19 or Iveco V8 engines to offer a power range up to 650 kW. Siemens took delivery of 156 Turbopacks for use on the 51 three-car Class 185 Desiro DMUs supplied to British operator TransPennine Express to work fast inter-regional services over hilly routes. Rotem's 2004 order to supply 120 suburban DMU cars to Iran requires a further 60 units. The hydraulic transmissions are intended to run for 1·2 to 1·8 million km between overhauls.

Voith Turbo has set itself the goal of being the uncontested leader in fuel efficiency in the 2 000 kW+ power range.

The company's L620 reU2 locomotive transmission for up to 2 700 kW delivers an efficiency of 87·5% at full load, 86·2% at half load and 84·4% at 30% load. Voith Turbo is keen to point out that hydraulic transmissions are now equal in efficiency to diesel-electric drives. However, one customer compared his experience with a Vossloh G2000 diesel-hydraulic loco powered by a 2 240 kW Caterpillar engine with similar operations using a Siemens ER20 diesel-electric loco fitted with a 2 000 kW MTU engine. Running the same trains with the same drivers on the same track, the diesel-hydraulic loco consistently used 2 000 litres of fuel compared to 1 850 litres for the diesel-electric. Voith responded that it would examine these results in more detail.

A new development which will be launched on the market next year is the T/TP211 e range of transmissions. The T211 e drives the bogies in a straight line, whereas the TP211 e includes a 180º turn (Fig 1). This range is targeted at the replacement of the 1365 DIWA dhm transmissions including those used on the 348 first generation Regio-Shuttle railcars. Voith anticipates that the maintenance interval will be increased to three times that achieved with the DIWA drives.

The next major development will be ready in 2009, the TurboFlexx L530 bre U2 transmission intended for the 1 000 to 1 700 kW medium-power range (Fig 2). This will be available with a split transmission, enabling each bogie to be driven separately.

Discussions in Würzburg turned to Voith Turbo Lokomotivtechnik, and its Maxima 40CC locomotive which has an ABC V16 engine rated at 3 600 kW at 1 000 rev/min and a TurboFlexx LS640 re U2 split transmission (RG 7.06 p402).

It is anticipated that EBA will grant approval later this year for the Kiel-built loco to operate on the German network, but the big question is where customers will be found for this powerful machine. EMD and GE diesel-electric locomotives with these outputs have already appeared in North America (RG 7.06 p389), where Canadian Pacific and Union Pacific operated 44 EMD SD90MAC Co-Co locos with Siemens AC transmissions, rated at 4 475 kW. In 1963 Europe had Kestrel', a 2 941 kW Sulzer/Brush prototype Co-Co locomotive tested on British Rail and eventually sold to the USSR in 1971. In 1962 DB tried a 2 x 1 900 hp Henschel/Voith E320 C-C loco, but during the 1960s electrification replaced interest in such powerful diesels in Europe.

Perhaps China will be interested in the loco, which is estimated to have cost Voith more than k50m to develop.

In the 1960s Voith introduced hydrodynamic braking as part of the trend for more powerful braking. The growing need to be more economical with energy has now set Voith along three routes for further development.

In the Ecopack, which was displayed at InnoTrans in Berlin last September, braking energy is used to drive a hydrostatic pump and motor from the secondary part of the turbo transmission, pressurising hydraulic oil in accumulators. The energy thus stored is used to accelerate the train after a stop, without the diesel engine running. Energy savings of up to 15% have been calculated for the Ecopack.

A completely different way of saving energy is to use exhaust gases and cooling water for traction and heating purposes. In partnership with the Fraunhofer Institute and the technical universities of Dresden, Graz and Karlsruhe, Voith has developed two variations. These are known as SteamDrive and SteamTrac, but despite the names there is no water involved, as special fluids have been used to avoid earlier problems with water quality. The closed system contains 25 litres of a medium at pressures up to 60 bar, the maximum temperature of the fluid is 350°C, and condensation occurs below 90°C.

Fig 4a illustrates the use of diesel exhaust heat to supplement transmission energy, while Fig 4b shows a planned future variant, where energy from the cooling water is converted into electrical power.

The exhaust gas passes through a vapour generator, evaporating the fluid with an expansion which is converted into mechanical power in the expander (Fig 5). The condenser forms part of the cooling liquid circuit of the engine and transmission, and the cooled liquid is collected in a tank for pumping back into the vapour generator.

SteamTrac is now being built into a Railpack, which will undergo bench tests in Hamburg during February 2008, before the first trials on a DMU car during May 2008. Voith estimates that a 10% saving in energy could be obtained if such a system were to be installed on a Maxima locomotive. Full power would be increased by 12%, and at part load 20% of the power would be delivered by the vapour system.

A very innovative development, it will only work if the components show the same availability and maintenance characteristics as the rest of the transmission and control of the system does not pose problems.