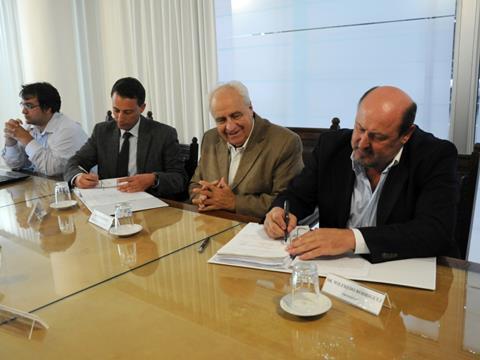 URUGUAY: State railway authority AFE has awarded a contract for the introduction of a satellite-based train control system, which is due to be rolled out across 1 600 route-km over the next four years.

Under the contract signed on December 21 by AFE President Wilfredo Rodriguez and Minister of Transport & Public Works Victor Rossi, the equipment is to be provided by Brazilian manufacturer ART.

Rossi explained that the new train control system based on international standards would replace fixed block working that has been in use since the 19th century. Replacing signalboxes at each station by a centralised traffic control issuing movement authorities based on satellite train location would permit more flexible operation, allowing more trains to operate over the network at the same time. The control centre would also be able to co-ordinate engineering possessions for maintenance work.

Describing the contract award as ‘the best thing that has happened to the railway in recent times’, Rossi suggested that 2016 would see the AFE network ‘on the road to recovery’. The formation of operating company Servicios Logísticos Ferroviarios as a joint venture between AFE and national development corporation CND would facilitate the acquisition of new rolling stock to revitalise rail freight services over the coming years, he believed.

Rodriguez anticipated that by the end of the government’s current five year term much of the 1 600 route-km that is now operable would have been rehabilitated to permit trains to run at up to 50 km/h.