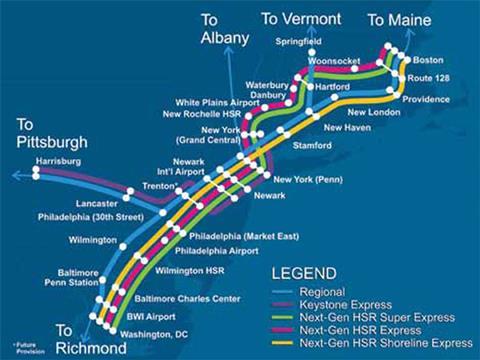 USA: Amtrak has set out a vision of a 680 km 'world class' high speed line to increase capacity on its Northeast Corridor, cutting Washington - Boston journey times from more than 6½ h to around 3 h.

The 'concept plan' published on September 28 would see the line completed by 2040, with the total cost estimated at $117bn.

The Northeast Corridor is Amtrak's most important route, and the national passenger operator says it will reach its capacity limits by 2030, even with the investment proposed in a NEC Infrastructure Master Plan issued this year.

As a result, Amtrak has produced what President & CEO Joseph Boardman calls a 'bold vision of a realistic and attainable future', based on building a new double-track passenger line suitable for running at up to 355 km/h (220 mile/h).

This is intended as a transport 'game changer', cutting journey times and increasing frequencies to attract passengers from airlines and increasing ridership five-fold from current Acela traffic. Overall NEC ridership would grow by a factor of four, and an annual operating surplus of $990m is projected.

Amtrak believes the NEC is ideal for a high speed line, as it runs through a 'mega-region' containing well-spaced metropolitan areas with sufficient population and economic density, as well as existing transport links from the proposed city-centre stations.

However, it emphasises that the alignment analysed for the report is just one option, and much more work would be required before the 25 years of construction could get underway.