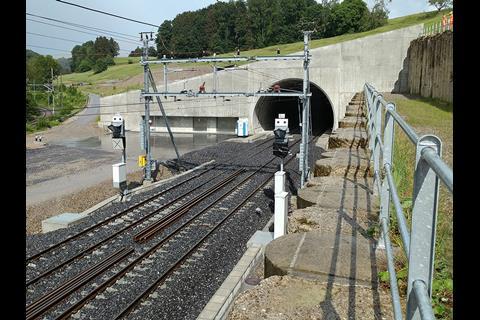 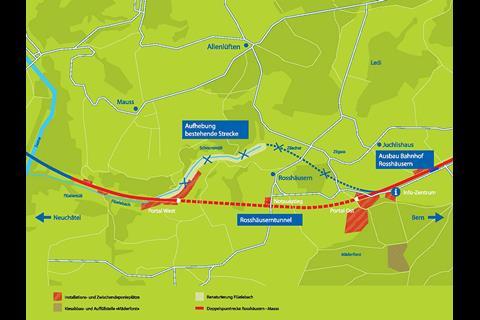 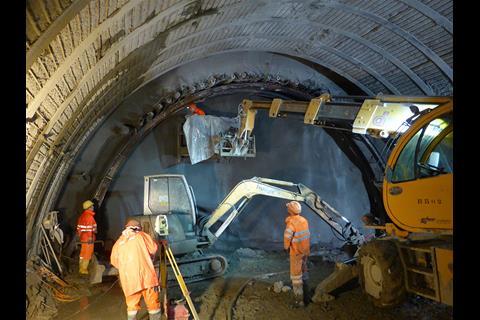 SWITZERLAND: BLS celebrated the completion of the Rosshäuser Tunnel on the Bern – Neuchâtel line on August 25, ahead of the planned start of regular services on September 3.

The 1 910 m long single bore tunnel with two tracks on a new 2·4 km alignment will replace a winding single track line opened in 1901, shortening the route by around 300 m and enabling the line speed to be increased from 90 to 160 km/h.

Construction of the tunnel began in September 2012. Difficult geological conditions, including sandstone and marl which becomes unstable in contact with air and water, led to a change in construction method, with the opening date being put back by 18 months and the cost increasing from the estimated SFr195m to SFr265m.

The opening of the tunnel will complete the provision of double-track on the 15 km between Bern and the Gümmenen Viaduct, which is expected to increase capacity and improve punctuality on the route. Spoil from the tunnel was used to widen the embankments, and BLS will start work shortly to refurbish the Gümmenen Viaduct and double the next 2 km of the route by late 2021 at a cost of SFr45m.