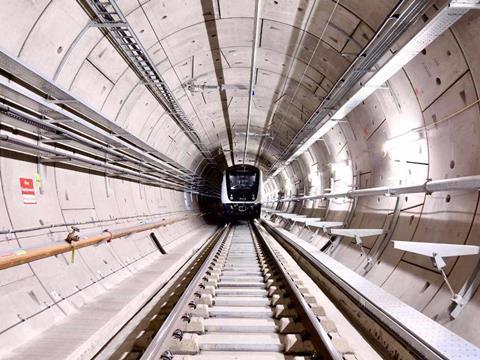 UK: Transport for London confirmed on December 10 that the Crossrail tunnels under central London are unlikely to open in autumn 2019, and that a new financing package had been agreed to meet the additional costs incurred through the delay.

The tunnels that will form the central part of the Elizabeth Line were originally due to open this week, but project promoter Crossrail Ltd announced in August that it expected the opening to take place in autumn 2019. TfL now says that ‘more work is required than had been envisaged to complete the infrastructure’, so ‘an autumn 2019 opening date could no longer be committed to at this stage’.

To meet the estimated additional cost, the GLA is to borrow up to £1·3bn from the DfT, to be repaid using local tax revenue. The GLA is to provide a further £100m from its own sources. The DfT has also agreed a £750m contingency loan.

The newly confirmed financing package replaces the £350m of short-term repayable financing provided by the Department for Transport as an interim measure, which the then Rail Minister Jo Johnson announced on October 26.

The initial findings of an ongoing review by independent auditor KPMG into Crossrail Ltd’s finances indicate that the delay to the project opening would add between £1·6bn and £2bn to the total cost. The previous cost estimate of £14·8bn for infrastructure works included £12·5bn for the central section, with TfL and the Greater London Authority providing £7·1bn and the DfT the remainder. Network Rail is financing the £2·3bn upgrades to the existing surface railways, and TfL is providing £1·1bn for the rolling stock fleet and depot.

In July the DfT confirmed that it would provide an additional £290m for Network Rail works and £150m to Crossrail Ltd, which also received an extra £150m from TfL.