Dhaka – Payra railway to be developed by UK company 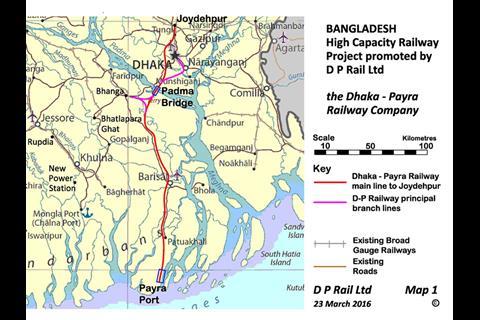 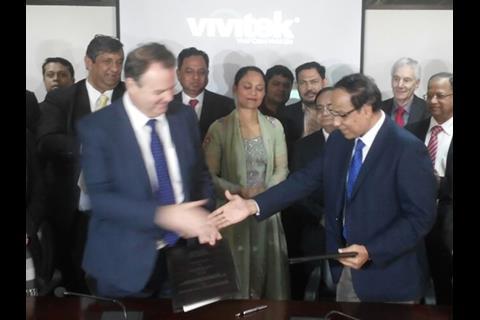 BANGLADESH: A memorandum of understanding for the development of a 240 km railway to link Dhaka with a planned deep water port at Payra on the Bay of Bengal was signed on December 20 by the government, Bangladesh Railway and London-based company DP Rail.

Construction would be undertaken at the same as time the development of the port so that both would open simultaneously. The new railway would provide a fast and high capacity export route for clothing manufactured in Bangladesh, and carry imported goods to a planned distribution hub in Dhaka.

DP Rail hopes that freight services could begin in 2024, with frequent daily trains up to 1 km long running at 100 km/h. Traffic is estimated at 2 million TEU in the first full year, rising to almost 4 million TEU/year by 2030. Coal and other bulk traffic is also envisaged.

‘This is a project of vital national importance to Bangladesh and I welcome the fact that this project has been proposed as a "best of British" railway, representing a substantial export opportunity for the UK railway supply chain’, said UK Member of Parliament and Trade Envoy to Bangladesh Rushanara Ali. ‘I know from my discussions here that the project also enjoys the unequivocal backing of the government of Bangladesh, the UK government, as well as the full support of the government of the People's Republic of China through the involvement of DP Rail's partners, China Railway Construction Corp. I am looking forward to seeing the benefits that this project will bring to the people and businesses of Dhaka, and to Bangladesh in general.’

DP Rail Chief Executive Ian Derbyshire said the company’s ‘experienced and knowledgeable team’ was ‘now ready to put every effort into bringing this exciting and game-changing project to fruition’.