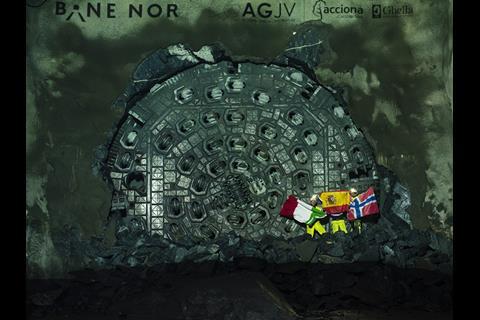 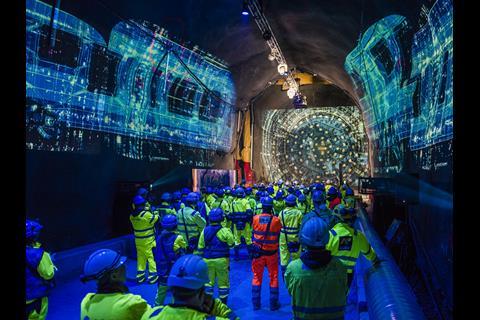 NORWAY: Tunnel boring machines ‘Dronning Eufemia’ and ‘Dronning Ellisiv’ simultaneously broke through to complete a 9 km northern section of the Follo Tunnel on September 11, a significant milestone in the construction of the 20 km tunnel which will be the longest railway tunnel in the Nordic region.

The twin-bore tunnel will carry Jernbaneverket’s 22 km Follo Line; which is being built to duplicate the busy Østfold Line running southeast from Oslo. The new alignment is being designed for 250 km/h operation, which would halve the fastest journey time between Oslo and Ski while allowing local services on the existing route to be enhanced. Completion is scheduled for December 2021.

A joint venture of Entrepreneur Acciona and Ghella was awarded the €1bn contract to build the tunnel in March 2015. Boring began in September 2016 from a shaft at Åsland near the mid-point of the route. TBMs ‘Dronning Eufemia’ and ‘Dronning Ellisiv’ headed north from the shaft, while ‘Anna fra Kloppa’ and ‘Magda Flåtestad’ are heading south and scheduled to emerge at Ski in spring 2019.

The 2 400 tonne TBMs are 150 m long and 9·96 m in diameter. They were specially made for the hard rock, and are the most powerful tunnel drills ever produced, according to manufacturer Herrenknecht.